Assam, in India’s north-east, is known as the Land of the Red River and the Blue Hill. The Red River is the Brahmaputra, by now on its course from the Tibetan plateau it’s rich with red silt and keeps the valley fertile; its slow glide seems to set the pace here, for Assam is also known as the land of lahe lahe (slowly slowly) for that’s how things are done.

In Guwahati, Assam’s capital, the river passes the blue hill, Nilachal, which is the site of an ancient Hindu temple called Kamakhya, dedicated to the mother goddess of love and on our second day in Assam earlier this year we decided to climb up it.

The walk up the hill starts just off the airport trunk road which is lined with parades of simple wooden-shack shops and in one we pick up a bottle of water from an off-licence, which in Assam are called Wine Shops.

This is a little confusing as they don’t sell much wine (mainly hard drinks, for the Indian middle classes love their whisky ‘sun-downers’) and, with their grilled fronts, and small hatches for transactions, they don’t look much like shops either. They resemble little cages with bottles on shelves and a small man keeping order.

These are worrying times for the shopkeeper. A proposed law due to come in to effect aims to forbid the sale of alcohol within 50 metres of a national highway. The rule change has been prompted by a highly publicised murder where the culprit was drunk and the thinking behind this rule change is that if people don’t see the shops on the national highway, they won’t drink, and if they don’t drink they won’t commit murders. The Wine Shops will have to relocate or stop selling alcohol but this being Assam, the shopkeeper is laid-back about it – he just keeps his inventory really low just in case and will wait and see, for in India, anything might happen.
The footpath up to Kamakhya temple is lonely – most visitors prefer to take a bus – and it’s a pleasant, shaded hike lasting just half an hour. Small local temples line the stony path, at their entrances brass bells dangle, and inside are arrays of small clay butter lamps in front of stone idols coated with shiny red vermillion.

The traffic noise quietens, the trunk road and its pollution-haze appears in gaps in the scrub. We pass a huge black boulder with a carving of Ganesha on it. The city seems distant. The only movement is of yellow butterflies in the shards of light between the branches. Guwahati, ‘The Big G’, once again gifts us a glimpse of her natural beauty.

The footpath opens up in to a wide open space, to our left a football field where children play cricket as they are prone to do in any space on the subcontinent. In front of us, tin-roofed shops are draped with weeping marigold garlands, their stalls packed with gifts for the mother goddess of love, clay butter lamps, boxes of matches and incense sticks, packets of cashew nuts and blood red cloths of gold tinsel for the devout to present to the altar. 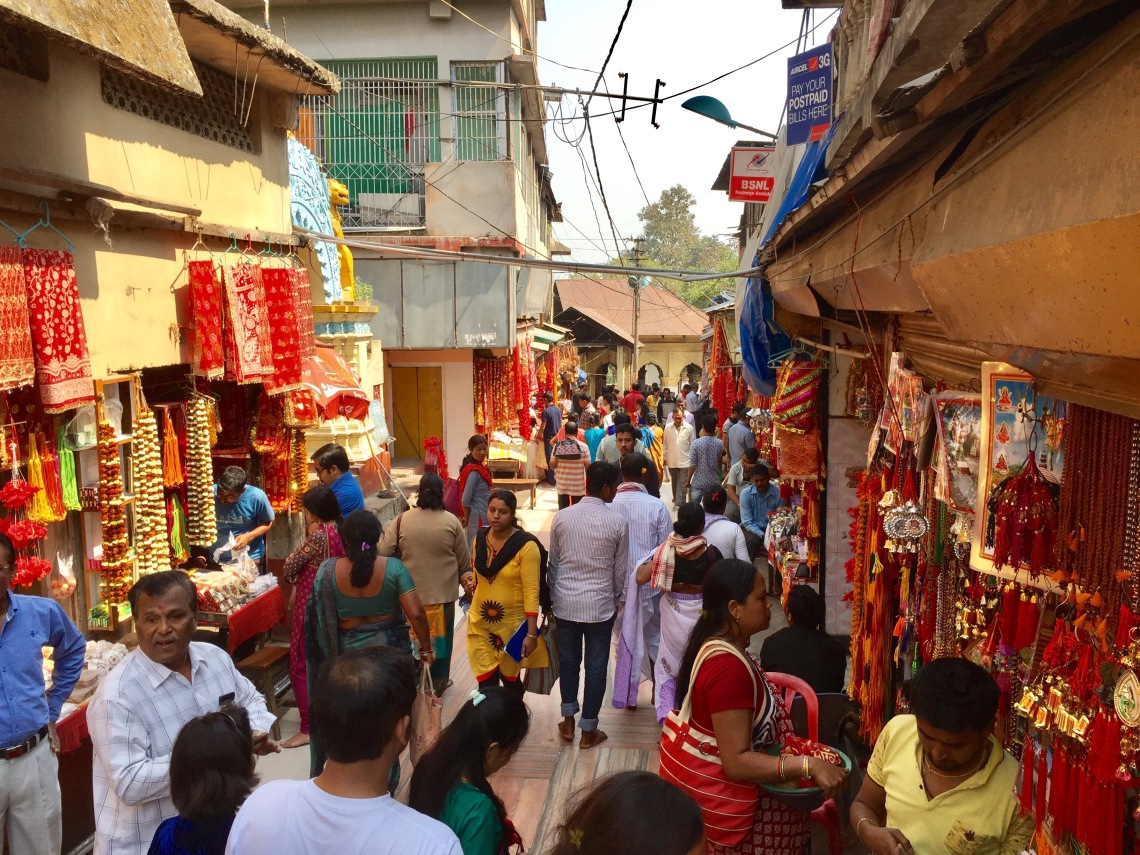 Pilgrims size up the wares. A woman blows on a white conch shells to check its shrill pitch, its sound associated in Hinduism with the first sound of the universe, ‘on’. Trinkets, calendars and necklaces of glass beads, black stone statues of Hindu gods Siva, Vishnu, Nandi and Hanuman are sold. I buy a carved statue of a stone bull, I’m please to have haggled it down in broken, hesitant Assamese from 2200 to 1500 rupees.

Sun-warmed stone steps under our bare feet take us through an avenue of shops. Carvings and bronzes of buxom figurines, their faces and limbs heavily stylised straddle the white marble steps. There are ancilliary steps on one side going up to smaller temples.

We arrive at the main temple complex. According to Hinduism, Lord Shiva held the dead body of this wife in his arms, and, furious, he started his dance of destruction of the universe. Where her bodyparts fell, temples called Shakti Peeths were built and one of the most sacred of these is on this unassuming little hill overlooking the Brahmaputra by the national highway in Guwahati. Pilgrims, especially Tantric believers, come from all across India to visit the little three-domed temple of Kamakhya atop a verdant hill.

The main temple has a large dark oval dome with two smaller pink domes, each with horizontal ridges, topped with a pinnacle of gold – on the temple’s outer sides are carvings of the goddess of love, her face serene, eyes closed and palms open at her sides.
Those that queue for a close glimpse of the altar have to wait for up to 4 hours and in long cages that wind up the hill and are not for the claustrophobic. On a positive note this means queue jumping becomes almost impossible, only allowed by ‘VIPs’ who pay 500 rupees.

A priest with three lines of ash on his forehead takes us through a compound where black baby goats are tethered – they are too tired to bleat, panting in the noon sun, as if they know their immediate fate.There is a slaughter house lined with marble paving, etched with black Assamese letters of prayers, and small canals from where trickles of blood flow. Occasionally we hear a bleat and then silence. Their flesh is brought out in to the sun in large metal bowls. Up until the early 1700s Kamakhya was a sinister place for human sacrifice was performed here too.

We enter the first square chamber. A young girl in a red sari is sat on a chair, her feet are on a brass plate and she’s surrounded by offerings of garlands and incense. Her face is made up and she appears calm with a regal air. Her family and other pilgrims place petals on her feet. She is being worshiped as a Goddess. Some believe that the goddess appears in the form of a living virgin. This is kumari puja and worshiping young girls as the mother goddess, without any caste bar, is an ancient custom across India. It is, for some, a controversial practice.

The second chamber is longer and has a stone idol and the third easternmost chamber, has a brass gate beyond which we can’t pass – only the devotees of the 4 hour queue filing past an altar are allowed. A pile of offerings of garlands stack up beside a spring of water which runs over a stone, a natural fissure, conical shaped about a foot long and representing the Goddess’s feminine parts, the yoni, the most sacred part of the temple, where believers have come from far and wide to worship.

We step out of the cool, dank temple interior, blinking in the sunlight to enter a snack shop on the blue hill, a small, simple place of plastic chairs, lines of tables are diligently wiped down by waiters shouting orders. In the corner is a glass cabinet filled with pastries and snacks and we order samosas and hot Assam tea, served very, very dark and sweet. With a few sips we’re energised for our return.