This is a true mystery that happened in my kitchen – it involves multiple murders, male-only breeding, a sex-change and suspected cannibalism.

It’s also about my pet fish.

It had all started so well: a glass fish tank, pure white sand, aquatic plants, ornamental rocks, a bubbling filter and a small heater that kept the water at an exact 26 degrees, just the right level of luke-warmth for happy tropical fish.

I positioned it on a worktop in the kitchen, and if it wasn’t for my smoothie maker and toaster beside it spoiling the illusion, it could have been a tiny cube right out of the Amazon.

We chose 7 compatible fish at the pet shop. These were as follows:

Our tank would be strictly male-only, for that way there would be no risk of babies and overpopulation. Our little Amazonian utopia of 7 fishes, would have its exact population, a static census, everything in balance and in proportion to the tank size.

We lovingly released each fish in the tank from small plastic bags and watched them swim in to their new home, under stone arches and between plants. The guppies quivered in shoals; the mollies circled. Idyllic aquatics. Sweetness and light. or so it seemed.

Not all was harmonious in the tank. The big black molly, Clyde, was the first to die one night. His limp body was found floating at the top like a leaf. 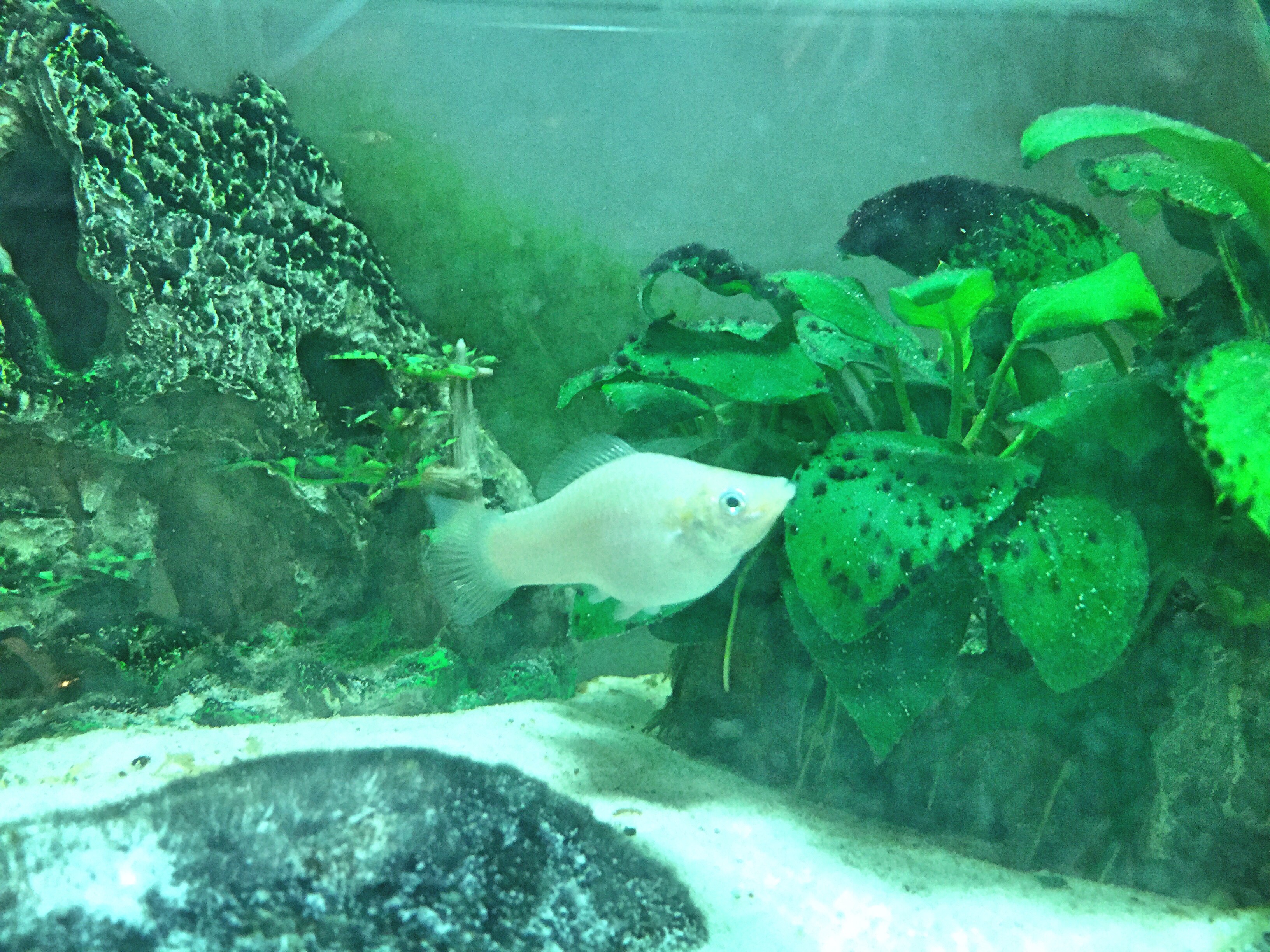 Bonnie, the big white molly, just swam around innocently, opening his mouth as if to say ‘it wasn’t me.’ He denied Clyde’s murder. It certainly couldn’t have been our cat, Monkey, she doesn’t climb on our kitchen.

Within days another fish died, this time the yellow tailed guppy. Bonnie swam around innocently, its mouth ajar.

Although we had only bought males something totally uplanned happened. One morning 5 tiny white molllies, each 3 millimetres long emerged from the dark interiors of the plants. Each looked a spitting image of Bonnie.

What the hell was going on? Immaculate conception? I was bamboozled. My flabber was gasted.

The five baby fish soon grew from 3 millimetres to 5 cm to resemble their ‘mother’ in what seemed like no time. This shoal of fish dominated the tank. An air of hostility filled the water as they circled round bullying the other guppies in their mafia clan. They nipped the colourful fins of the other fish till they resembled frayed flags. They even nipped each other at times. Fish on fish gang violence broke out.

More guppies died. The lovely blue guppy was found bobbing in the airflow of the filter, no doubt after a gang ambush from behind the ornamental rock. The small orange guppy was never found, perhaps devoured as a communal midnight snack.
Soon there was only 2 nervous-looking guppies and 6 belligerent white mollies in the tank. And all this time, Bonnie swam around innocently with his/her entourage of bruiser offspring. They took on a sinister air, and our cat-sitter friends, Verity and Sharon, would feed them sheepishly, with a teaspoon, not getting fingers too close to the water’s surface.

The disharmony of the tank had to stop. I put an advert online:

In my desperation to end this angst, I didn’t want money, I just wanted peace. We got 5 responses in the space of an hour and chose the one person who looked like he might be able to look after them. Even brutish fish are deserving of loving homes.

Osvaldo a Brazilian came over on his bike that evening. We knew he would be the right owner for the mafia fish. Anyone who can make his own fish-food must know his stuff (Side note: in case you’re interested, he made them from dehydrated salmon and cod flakes and soaked peas which were then crushed )

“That molly is pregnant I can tell,” he said pointing to a fish.
“I have no idea how we managed to breed babies in there, we had only males.”
“They can change sex you know.” I looked him in the eye.
“Yes live-bearers like mollies can.”. That was my epiphany.
“Bizarre. So some of the males may have become females?”
“Uh-huh,” he nodded as he fished around with a net. “They have an extra sex chromosome to help them.” Yes Osvaldo really knew his stuff. “Even the females don’t need males after a while as they can store sperm in themselves.”
“Bizarre, although practical. We couldn’t find some of the dead fish they must have eaten them right? ”
“Right, cannibals, and they sometimes eat their own young.”
“Why would they do that?”
He shook his head. “Perhaps they forget.”

As Osvaldo spoke, we fished out the thuggish mollies one by one, extricating them from their gangland turf and it all became clear:

Bonnie and Clyde were actually both males to start off with. Bonnie must have become a female and had babies. And as Bonnie no longer needed Clyde, as she had stored his sperm, she had bumped him off in the dead of the night and started to rear her own gang of thugs that would rule the tank till I had them expelled from the tank by a knowledgeable Brazilian fish enthusiast.

The mystery was finally solved.

That night the tank was quiet. For the first time in months, peace broke out with just two guppies to enjoy it. Just before I turned off the tank’s light, I noticed something stirring among the reeds; a tiny baby fish, a white molly, 5 millimeters long, appeared. Its mouth was agape as if it was surprised to see me; its eyes were wide, just like its mother Bonnie. It stared straight at me, sternly and callously, as if it was saying, “hello. We’re back.”