After 20 hours of travelling from the Himalayas we got to the laid-back town in north Thailand, Chiang Mai; we feel the heat; get fined by cops (again); visit a night market; learn how to respect The Buddha and ride mopeds in the rain.

Imagine a small 800 year-old walled town, which is perfectly square, each side with a gate, all surrounded by a moat. Fill the town with small rectilinear roads and lanes, scatter with trees and flowers, coffee shops, restaurants of tasty food and two quid beers, book shops, friendly locals with ready smiles and lots of golden temples (wats) … and then you get a sense of the old walled city of Chiang Mai.

It’s 40 degrees here but the heat has its advantages; clothes dry overnight, there’s no need to iron your shirts, the creases just fall out and when you feel too hot just find a find a sprinkler on a lawn or a mist spray on a tin roof and rotate there … keep on rotating like a ballerina or Anne Widdecombe in Strictly … or like a kebab on a spit. Actually the latter is a better analogy because, damn, it’s hot. 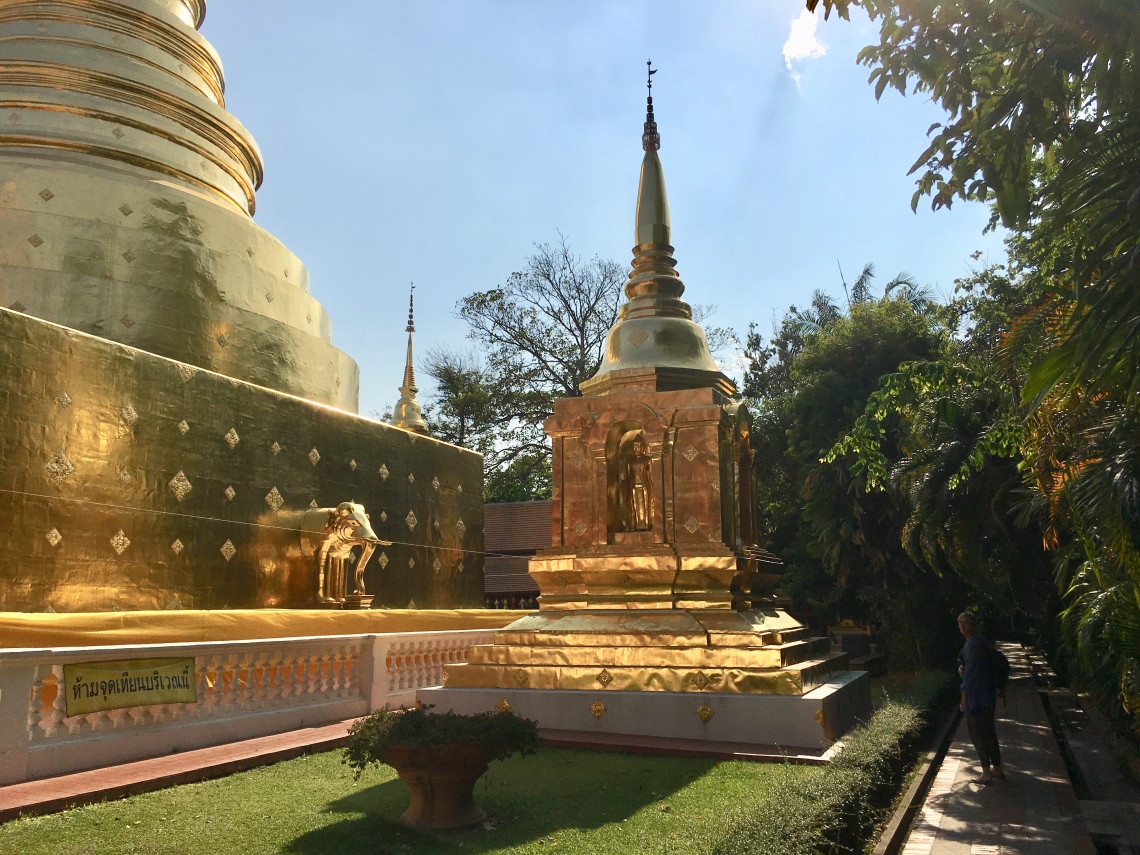 I wonder sometimes, are we flashpacking or backpacking?

It’s turning out easier to live well here on little. We’re staying at Hotel Sira. It’s £12 a night with wide comfy beds, clean bathroom and sheets, wooden floors and a/c. We haven’t had to hostel it yet. So much for backpacking on the cheap; this might be flashpacking.

Mind you, we’re keeping costs down, taking buses not taxis, and walking about 16,000 Fitbit steps day; we don’t want to end up in my mum’s house in Wandsworth before time’s up just because we spent all the budget. This blog then would be very different. “And as the sun set over the Bingo Hall in Tooting Broadway on Friday night …”

Author’s note: By the way, I’m hoping you’re enjoying the blog series of posts backpacking around south east Asia. We’ve been to Assam, enjoyed a fabulous Himalayan wedding, and from Thailand we’re going to Laos, Vietnam and onwards. We have had to reroute some of this, more of that later. I’m unsure if I’m going to be able to blog at this frequency, because on the road blogging needs quick content, editing, fact-checking and typos removed often on an iPhone. I’ve got fat fingers but I’ll do my best 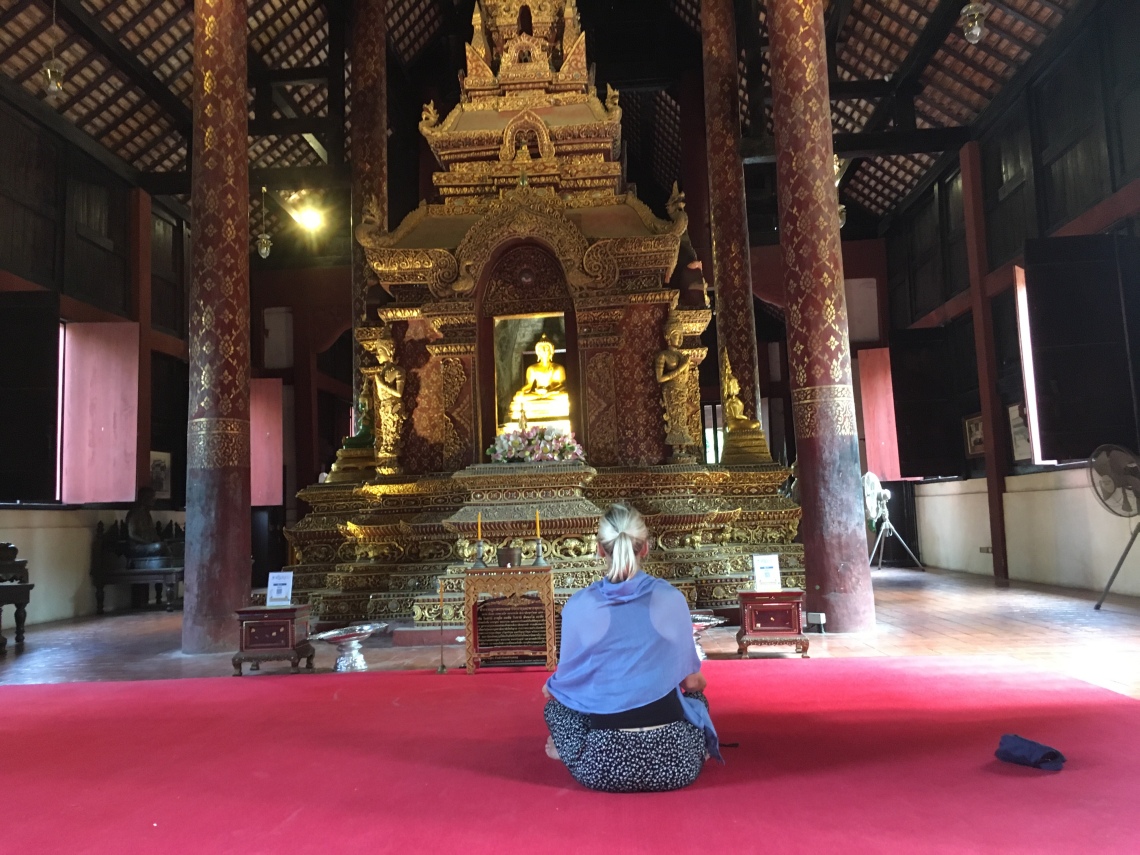 The two main temples are the Wat Phra Singh and the Wat Chedi Luang. At the latter, after a rainstorm that made the puddles glisten black against the gold building, we went for a ‘Monk Chat’ session just before sunset and met an 18 year old monk called Shi who had come from north Myanmar and joined the monastery at the age of 10 to a new life of reading scripture, praying and temple etiquette; he has to follow 10 rules as an apprentice, older monks have 270 rules and women even more.

Respect for the Buddha

There are certain rules to follow for temple etiquette. When we entered the Wat Chedi Luang I saw a group of group of young girls infront of the Buddha looking at their smartphones and chatting. How irreverent I thought. As I got closer I saw they were reading Buddha’s scriptures to each other. I was mistaken.

There’s a growing movement here to respect the Buddha, and there are signs in each temple to make this clear. Buddha heads shouldn’t be used as decoration or for tattoos. In the temples, one should have humble body language and shoes and hats should be removed before entry; feet should never be pointed towards the Buddha statue and one must be seated lower.

When I read that rule, I was concerned. I never knowingly wear strapless tops or miniskirt, but I always wear shorts when it’s hot. Luckily I had packed my shemagh and made this in to a make-shift sarong. Some Thai people started to take photos of me. I may have gone viral. I later learned the ‘no shorts’ rule was only for women and men rarely follow this.

My ‘sarong’ was so wrong, and consigned to being a iPad cover once again. People in this town are breathing a sigh of relief. I am no longer a novelty.

The stone temple steps at noon feel like frying pans on bare feet. When I exited the main temple, the Wat Phra Singh, my feet were burning and I had to lift them in sequence, walking down the steps, shouting ooh ahh. I must have looked like the way a dad dances at weddings. 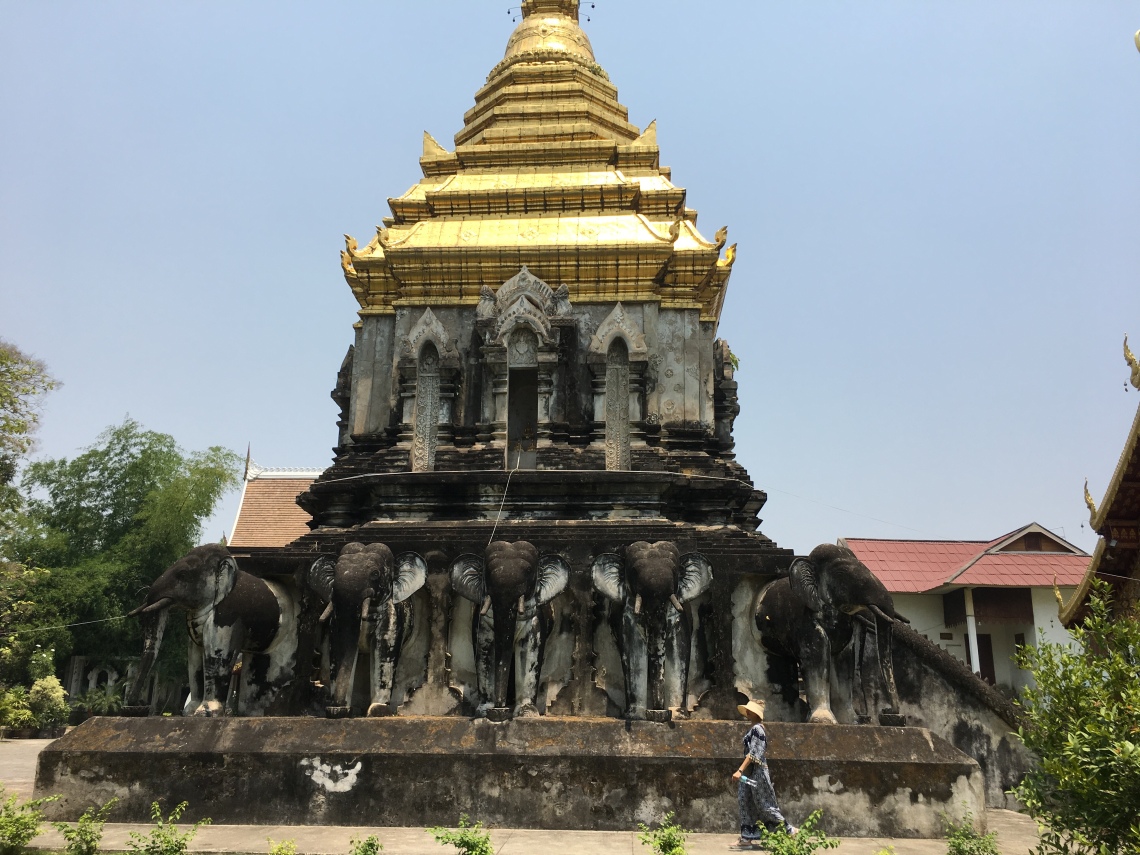 There are ways to avoid toasted feet:

Mopeds in Chiang Mai: stopped by the cops and fined (again)

The Buddha said ‘do good, avoid bad, purify your mind.’ Today we failed on the second. 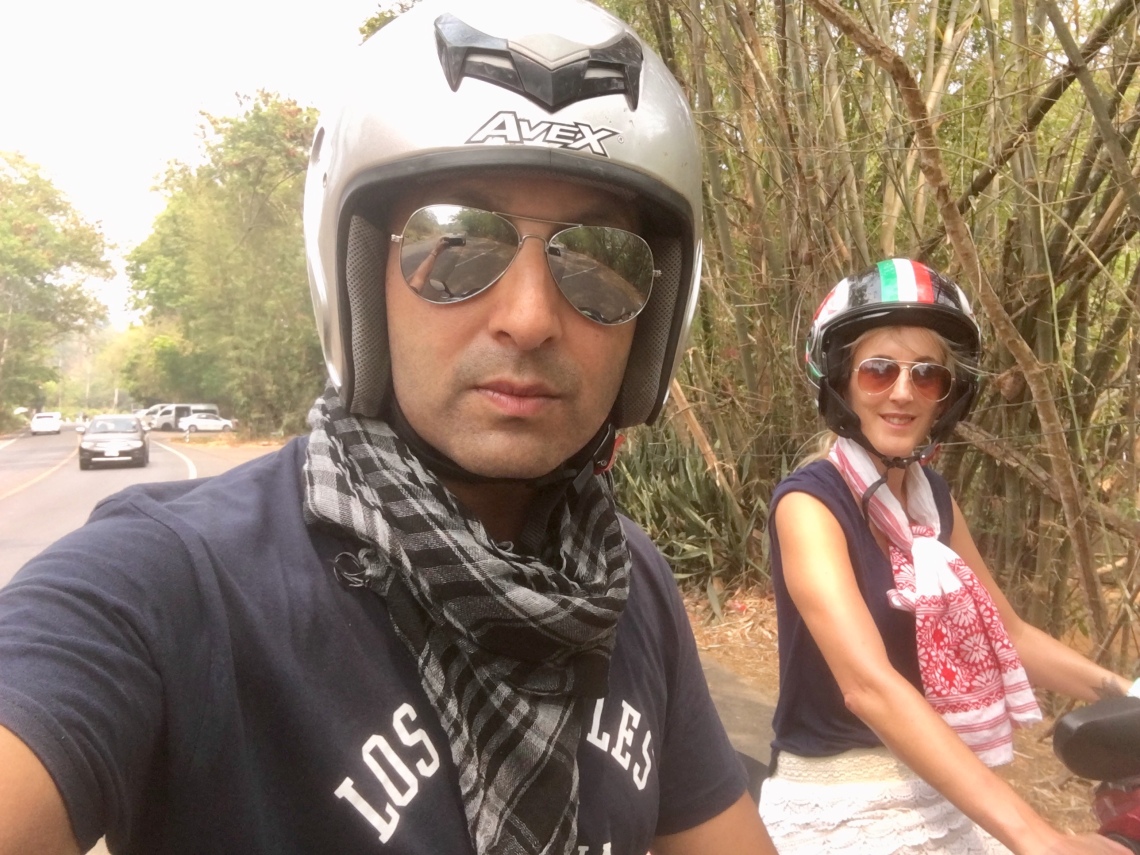 We hired mopeds and headed north. If you ride in any direction from Chiang Mai, you’ll hit picturesque countryside of paddy fields and lush hills, but before then is a sprawling city of three lane roads, shops, showrooms and concrete. It was only then in that 40 degree heat did I realise how big Chiang Mai is.

There was a police roadblock just north of the city and we got flagged down. “Which country you from? Where are you going? Show me your licence?” said the policeman.

Thai police always look a little more authoritarian than a British bobby, so I was all yes sir and reverential. His gun added to my obedience. He looked at my EU/UK licence and said, ‘This is illegal.’

‘We haven’t left the EU yet,’ I replied.

‘You don’t understand, you need international driver’s licence,’ he said.

I then had to pay fines of 1,000 Thai Baht each (£25 each). I didn’t have enough cash on me, he didn’t accept credit card (funnily enough) so I had to make a u-turn to an ATM to take out some cash whilst leaving Sarah to make small-talk with the policeman. He didn’t even give me a receipt. A little further on, the same thing happened again, but I managed to convince the copper that I had already been fined.

We turned left at Mae Rim after 15 kilometres to take the 1098 Highway and suddenly everything changed. The road wound its way through paddy fields, forests, hills, elephant sanctuaries and Karen Hill tribes. Many of these are the top tourist attractions around Chiang Mai and are situated here for access to the tourists. We were advised by many websites not to visit the tiger farms where the felines are drugged up and made to be petted by tourists and today many of elephant camps don’t allow rides anymore. We rode up the Doi-Suthep hills to the Queen Sirikrit Botanical Garden and went on to a walkway 50 metres up in the forest canopy to look for a flying lizard called a draco, but only managed to see bark that looked like a draco.

Suddenly the clouds parted and we found ourselves trapped in a cactus greenhouse for two hours; there was nothing to do except watch the storm and read about cacti. We stayed dry; we became cactus experts. I even forgot about the fine.

The botanical garden closed at 5pm and we had no option but to ride in the rain back to Chiang Mai. Every time it stopped raining on the highway, the road would steam, and then the clouds would come back in and we’d ride closer to the lighting above the city. It was a tough and wet ride home.

So we deserved a massage in the Wat Si Koet temple which was really good value at £2 for a full hour. I often feel there is a fine line between a massage and torture; my masseur pulled my limbs, stood on my back while pulling my arms as if I was a scooter, and every time I made a sound (like ouch, or oww) he did it again but harder. I may have harmed him in a previous life.

At one point he sat me up on a cushion and put his palms together. I thought I was being worshipped but then he hit me on the forehead with his joined palms, starting the head massage. I now feel so flexible I might be able to rotate my head 360 degrees like the girl in the Exorcist or at least sleep across three airline seats with the armrests down. I was though impressed at the physical strength of the man (Sarah said my masseur was actually a masseuse. Maybe).

Night-markets and girls of the night

After the evening in the temple we visited the Chiang Mai night-market which is a ten minute walk east of the old city wall. As soon as we passed the walls, the ambiance changed.

We passed rows of bars playing loud music and showing live premier league football on big screens. Outside one bar there was a row of girls dressed in little black dresses who were waving at me and shouting sawat di (hello) . I waved back because it’s never happens to me that a row of girls smile and wave at me. Sarah said they were girls that wanted my money on an hourly rate. Honestly, some people are so cynical.

The night-market was filled with all kinds of stalls selling clothes, T shirts, knock-off handbags and designer clothes. Prada, Chanel, Armani and Seven Eleven. Even T-shirts with the Chiang Mai elephant and ‘Same same’. There’s was an open area with food stalls around a stage where Thai dancers performed their slow, elegant and soothing-to-watch dance. The girls wore traditional long silk sarongs and made hand gesture that were accentuated with their extra long finger-nails.

We were luck to be in the town on a Sunday where, in the centre of the old city, is a walking market filled with handicrafts like key rings, eye masks, ornaments, artwork and lots of street food. At the cross-roads a Didgeridoo band called Tuku played and people sat around, on the ground listening.

It was a wonderful vibe, relaxed and chilled, typical of this town and its wonderful people.

It’s so laid back. I’ll end with this… 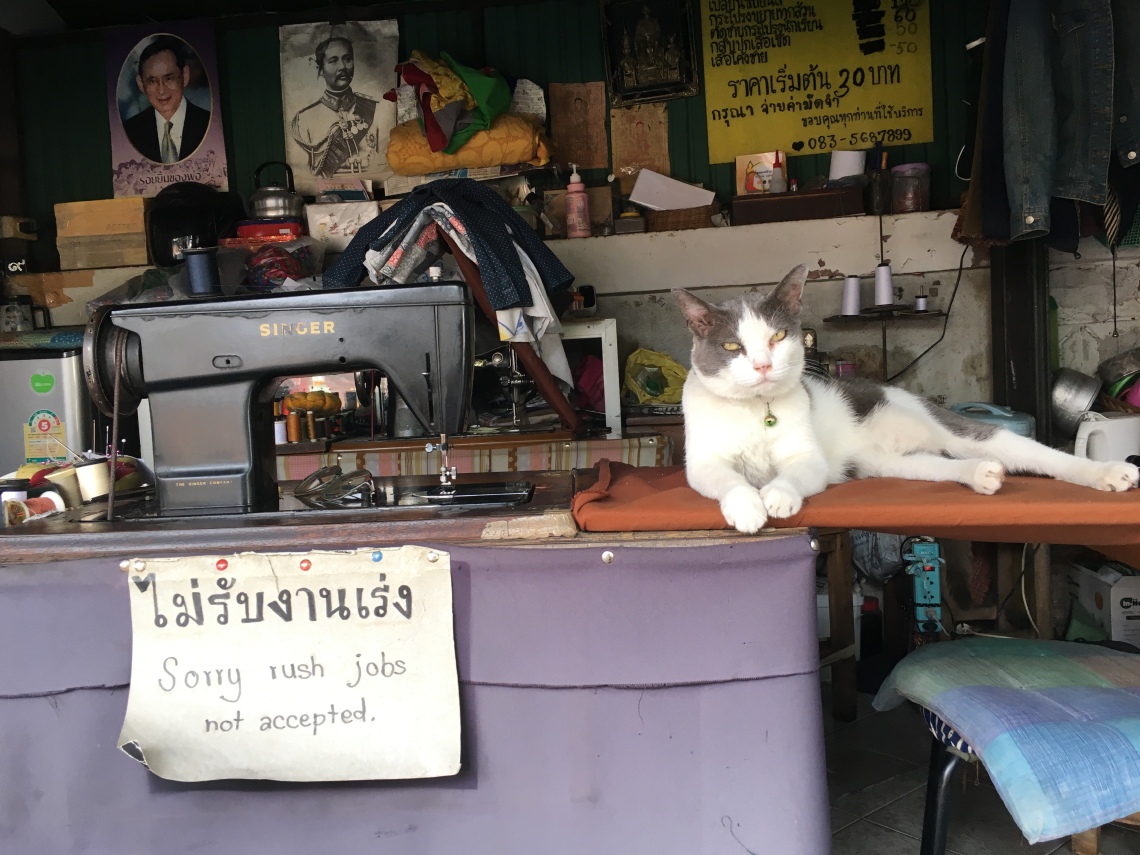