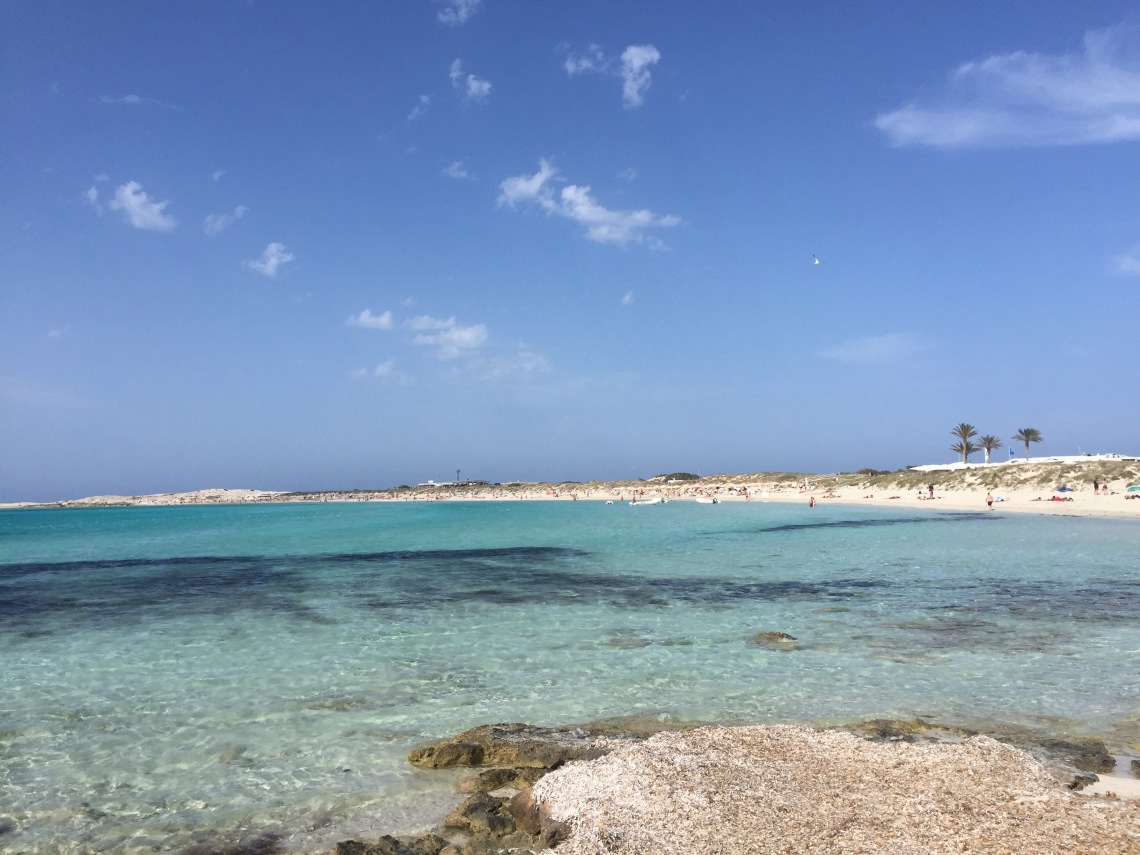 We’re on Formentera, a small island just 19kms across, to the south of Ibiza, it’s the worst kept secret of Europe’s pretty beach destinations; the waters are aquamarine and clear, its sands white. Its beaches are like the Maldives but without coconut trees or seaplanes.

There’s a laid back air. No clubs, no loud music, and each town is just a few miles away from the next. We’re staying at Es Pujols, billed as the only tourist resort on the island, but it’s really a single street sleepy seaside village with shops and restaurants.

The scooter hire man in Es Pujols didn’t want us to hire his chocolate-coloured Vespa. He tried to get us to hire a scooter with a big pannier on the rear. I have problems getting my leg over the seat and fear a snapped hamstring but my Spanish is not good enough to explain this.

Eventually I tell him coz Vespas are cool and he relents, agrees to hire us his Vespa (€124 for four days), lifts up the seat to show me the fuel cap to say his only words in English: only 95 octane green fuel okay?

He gives us our helmets. My wife gets a helmet sized Medium (with a yellow sticker ‘M’ on the front of it publicising to the world that her cranium is of a seemly, average size).

My helmet has a sticker that states XXL. There’s no point trying to look cool on a Vespa, wearing Ray Bans and Converse, if you have a helmet with a bright yellow XXL sticker on the front. So far I have been through the towns of San Feran, Es Pujols and San Francesc publicising to everyone that I have an oversized head.
We pick up some food in a supermarket – Spanish ham, Spanish cheese, Spanish bread and Cheetos.

We rifle through a selection of beach towels, hanging from a shop front; they range from €10 to €20 and come in all designs and colours, football teams, cartoon unicorns, lizards and flags of various nations including pirates. Presumably because pirates like to bury their treasure on a beach and then cover it over with a beach towel to lie on.
The cheapest beach towel today is the one with the British flag; yours at a mere €8.50 that’s a whole €1.5 cheaper than the pirate one.

Quite why this is, is a matter of speculation. Pricing, economists tell us, is a matter of demand and supply. Formentera is largely full of Italian and Spanish tourists who don’t feel the need to recline on or wipe their bodies dry with the Union Jack. That said, I haven’t met any pirates here yet.

I’m wondering if the shopkeeper is making preparations for Brexit. Perhaps I should negotiate.

Read next post ‘Adventures on a chocolate scooter #2: Down a hole and across a cliff in Formentera’ here