I walked towards the fire where there were two crouching silhouettes outlined in bright orange. I sat with them panting. One poked the embers with a stick, another lay on his coat  and stared sideways at the white-hot burning log. The warmth was comforting, and staring in to those dancing flames I forgot about my bout of claustrophobia. Further down the slope glowed another fire where the soldiers slept; we had been to advised to respect their anonymity.

I told the porter in broken French that I couldn’t sleep, I couldn’t breathe. He saw it often with hikers on Mount Karisimbi  – the sudden ascent from from a base of 2,500 metres, climbing 2,000 metres in 36 hours one and a half days was the main cause. We were then at 3,700 metres and needed to climb another 800 metres to summit.

I asked him if had the same problem but he said he was on nightwatchman duty, ready to raise the alarm in case of rogue buffaloes or militia from across the border with DR Congo.

We sat there for an hour staring at the flames and the red sparks that swirled upwards alone in our own thoughts; their faces flickered golden in the flame-light in contrast to the luminous grey of the plants and trees, illumined by a half-moon, peeping with an arm of the Milky Way, from cracks in the gliding clouds.

Occasionally one porter would switch on a torch and scan the surrounds, alarmed by a dew drop from a leaf tip or the crackle of a falling twig.

At 4 a.m. I was tired and went back to the tent and stepped on the wooden platform as quietly as I could and drifted off to a shallow sleep. Soon Innocente, our head guide, woke us. He was unbearably cheerful at such an ungodly hour.
‘We need to get ready, hurry please,’ was all he said.

Mountain men, no matter where they live are conditioned to these early Alpine starts. Mike, Christine, Johanna and Paula were already packing their tents and I joined them slowly, my groggy headed yet to imbue the excitement of the peak.

The morning air was fresh and high above, beyond the wooden frame of the platform, the clouds were parting to reveal a tantalysingly blue sky and the conical black peak of Karisimbi. It was a perfect day for the summit. 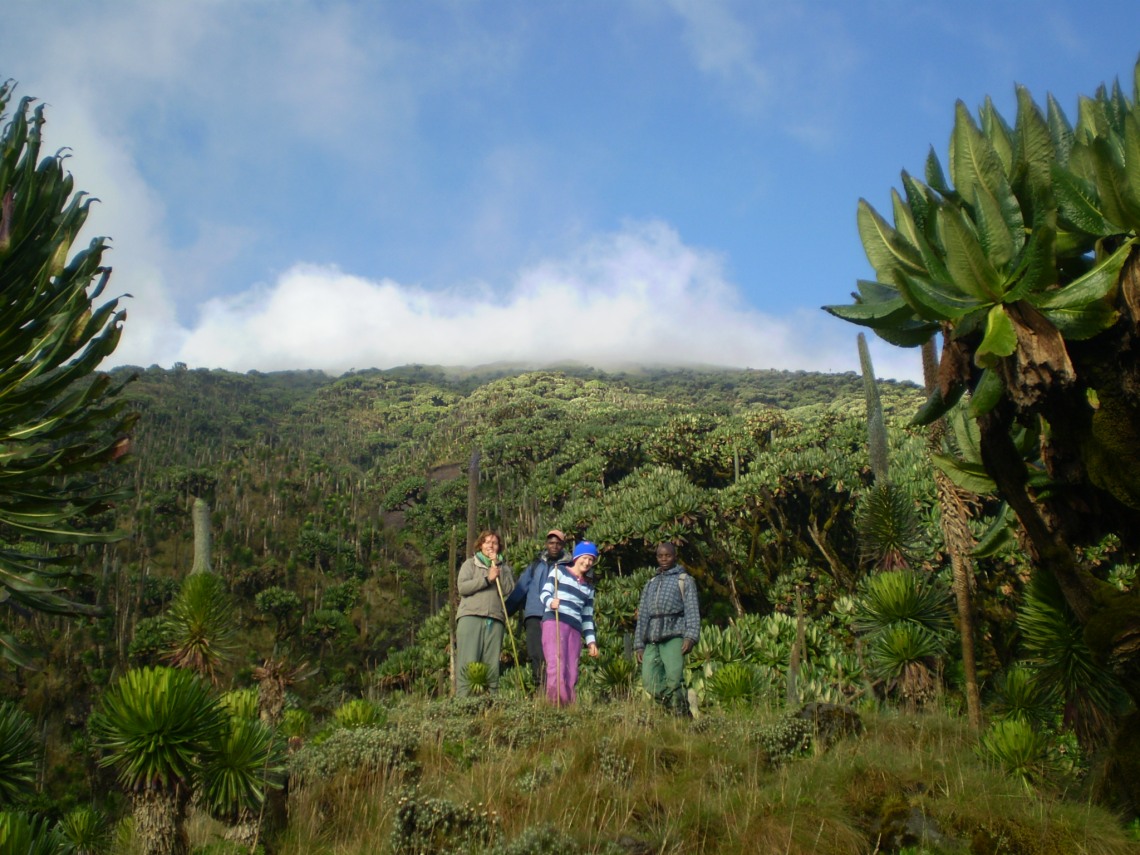 There was time only to eat a boiled egg. I guzzled mine too fast, it felt dry and crumbly in my throat. Along with some some nuts and jelly beans and lots of water, it would be enough to see me along.

The porters stayed at the camp and the five of us plus the guides started our ascent. The gradient got steeper almost instantly.

Karisimbi continued his entertainment, keeping our spirits up, keeping us wondering what the next act would hold. After the enchanted forest with old massive trees dripping with vines the previous day, we now met bizarre triffid-like plants; slippery fallen trunks zig-zagged like climbing frames before us.

We climbed across fallen logs and slippery branches; huge leaves lit up neon-green in the morning sunlight.

I spied Johanna looking camouflaged amongst the trees, as if in a Henri Rousseau painting. 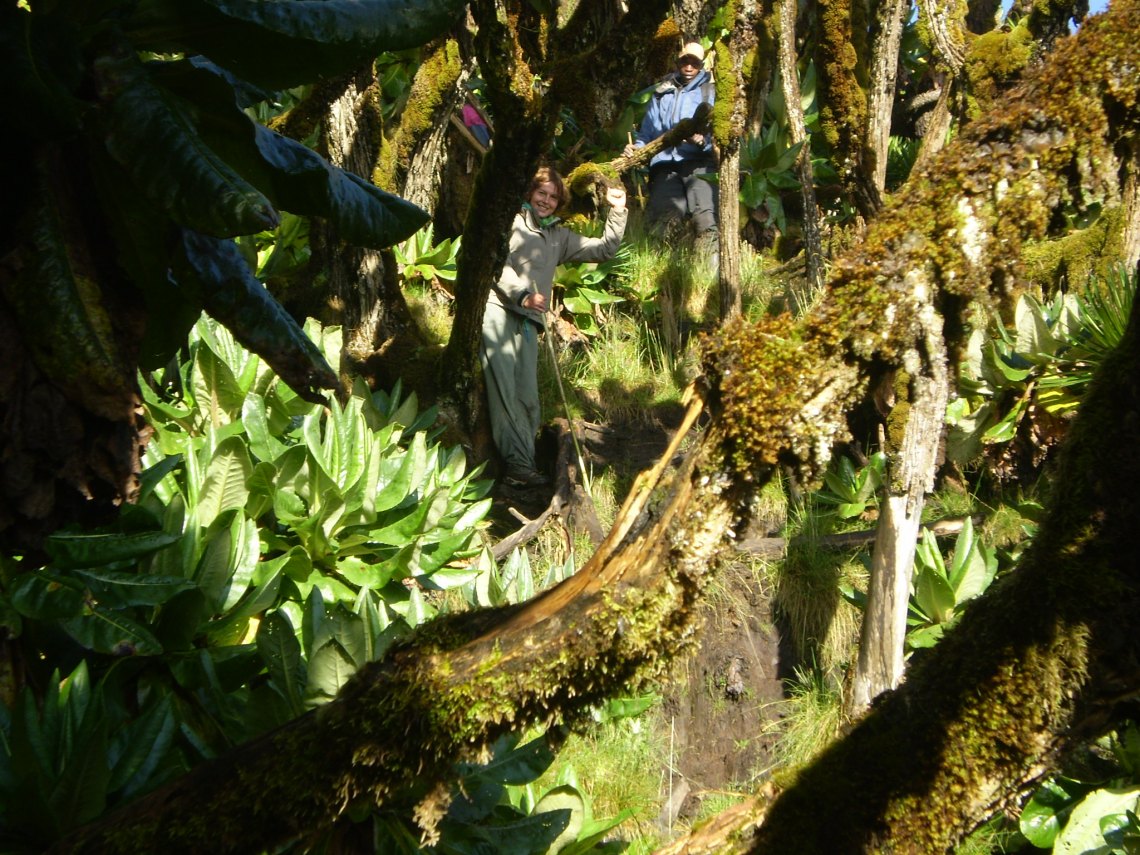 Soon we were above the tree line and an open field of green and brown mosses was above us – the ground suddenly felt spongy under our feet as if we were on a mattress. It made every step a little harder and a little bouncier.

The mosses gave way to black soil and I stepped on something half -buried, yellow and scaly; I prodded it with the tip of my boot and at the end I saw a claw. It looked like a chicken’s foot. For a few further steps I didn’t make anything of it – it didn’t even register with me – but then I wondered how it had got to that altitude of 4,100 metres.
‘That’s not a chicken’s foot is it?’
Innocent nodded. ‘Yes it is a chicken’s foot.’
‘This high? You’re joking? A chicken flew up this high?’
‘Not flew. An eagle has brought it here, to eat it alone,’ he explained.

The clouds rushed in and visibility worsened. We became shadowy silhouettes in the grey haze; the ground became black volcanic soil spewed from ancient eruptions, crumbly underfoot. It was as if we were in  a post-apocalyptic nuclear winter of burnt out earth where the sun rays never reached.

Slowly, like light sprinkling of icing sugar on dark chocolate, the first traces of snow appeared, congealed around little hollows and the shadowy crevices of rocks. It was the icy type of snow, snow that had been there for a while, not that crunchy, snow-ball-ready snow.

Karisimbi the entertainer, just as it was getting arduous and my lungs were trying to suck the air, he brought in something novel to occupy my oxygen starved mind.

Every trudge took an extra effort. Our lungs took a hammering in the last 100 metres of altitude; I could make 10 steps but then needed to rest to calm my wheezing lungs before refocussing my mind on something upwards, a rock, a patch of snow, and then drag my legs up there.

Suddenly the white clouds parted to reveal a swathe of bright blue. Karisimbi, the entertainer, unfurled his curtains once more to show the next act. Now there was the black soil under our feet, white clouds below us and blue sky above. That familiar blue of the sky, that colour that feels like home to everyone; it felt comforting after the alien mists. Just below us were the the silhouettes of the soldiers and the lower distant peaks of the Virungas.

We reached the top of Karisimbi at noon to exhaustion and elation. My lungs caught up with me, my legs felt like lead, my knees like jelly. As soon as our energy returned we looked across the Virungas – for miles around the landscape peeled downwards and away to the green horizons; to the north the sharp angular peak of Mikeno, to the west the active volcano of Nyabogogu and to the east Bisoke, the peak we had climbed a few weeks earlier.

At the top of the peak, across the black rocks, was a 20 metre high metal frame which housed a radio antenna at its top. Mike said, ‘Now we have to climb that metal frame to prove we have climbed Karisimbi.’ We looked up at it – it looked especially foreboding now.
‘I’m not claiming that!’ said Paula incredulously.
Mike gave a cheeky grin, and we knew he was joking.

Altitude can have different effects on people. These can include nausea, headaches, lethargy, dizziness and difficulty breathing. If it gets worse it can lead to cerebral or pulmonary odeoma.

With my band of friends I then realised there was one more symptom: silliness. It was due to the altitude or perhaps it was just the joy of having climbed the mountain and being once again in the power of Rwandan sunshine.

We started a song and dance on the top of Mount Karisimbi, singing, ‘One finger one thumb keeping moving’. I’m not sure what our guides made of our singsong.

With all this snow around us, there remained one more tradition to fulfil; infact it would have been rude not to. Paula gathered up some snow from between some boulders and made a little snowman – it was a little tricky as the snow was icy and didn’t stick very easily – she gave him jellybean eyes and hair of wet mud. As she tied his scarf of string she decided to name him Innocente after our excellent head guide. (I’m uncertain if the human Innocente was flattered about this.)

We sat at the top, admiring the snowman and the view beyond him, ate the rest of the jellybeans and sitting on a rock, contemplated our descent.

This post was part of the series ‘Letters from the Heart of Africa’ first published on the travel blog http://www.heyloons.com