Crossing the border from Rwanda to Uganda, a traverse from Francophone to Anglophone Africa, offered subtle changes from the bus window for those who cared to notice them – suddenly billboards were written in English; driving on the right became wrong; there were cricket pitches. Uganda, proud African nation through and through, still had hints of England that the winds of change didn’t completely blow away.

Kampala, Uganda’s capital, was a vibrant city, unapologetically exuberant, each urban panorama a huge ‘Where’s Wally?’* paired with the growl of a Formula One starting grid, where everyone was in motion and no one waited. Kampala was confident and self-absorbed in a nonchalant, couldn’t-care-less way.

Our hotel was just off the Kampala Road, the main shopping street where side-street vendors sold anything from grilled maize to a local dish called a Rolex made of 2 eggs in a flat pancake; paper-weighted newspapers on the pavements fluttered freely in the breeze, their headlines questioning the tax status of the president’s in-laws.

Especially conspicuous amongst the sidewalk publications was the 2008 ‘Sadam Hossein calendar’, with Iraq’s former dictator in the garb of a science fiction robot, carrying hi-tech weapons next to his side-kick Chemical Ali. I wondered at the time who would have bought that; I now wish I had.

Kampala’s rush hour traffic was more hostile and unrepentant than anything I’d ever seen in a city anywhere in the world – car bumpers squeezed together just a shin-width apart and snaked along its inclines (like Rome, Kampala was founded on 7 hills). Nothing moved in the grid-lock except the pedestrians and the weaving rides of the motorbike taxis, here called boda boda, because they can take you from border to border by  cutting through the lines of cars and buses and provide their pillion passengers a first person video game adrenalin rush.

We spent Saturday afternoon beside Lake Victoria, this huge lake I had flown over when I first arrived in Rwanda, its edges, tasselled pink, made from huge flocks of flamingos visible from high above.

The shores of Victoria felt like being beside the seaside, filled with resorts and hotels perched on golden sand across which giant loudspeakers blared out dance-music. Only the water wasn’t salty on my lips and storks vigilantly tip-toed the narrow tide marks. The  lakeshore bars prepared barbecues of tilapia as long as a forearm, served whole with chips and salad on metal plates, their eyes peering up you, their bodies scaled, serrated and seared.

Except it wasn’t really because a river’s length is measured from it’s most distant source to its mouth – and that, most likely, is from the Kagera River that flows in to Victoria and is fed by the Nyabarongo River, which is created by the confluence of the Mbirurume and Mwogo Rivers both of which start in Nungwei Forest in Rwanda. It’s therefore perhaps a lazy convenience to say that the Nile starts in Victoria and more correct to say it starts in Rwanda. (But it’s certainly a lot less long-winded an explanation).

How times change. That sunny Saturday afternoon as we drank bottles of Nile Special, listened to dance music and feasted on tilapia, far from being a remote place for explorers who called this the dark continent – it felt like being in Ibiza.

Thierry had spent his childhood in Uganda and knew its best hangouts. On Sunday we visited Owino Market, the second largest second-hand clothes market in Africa, an expansive labyrinth of booths and alleys. It looked chaotic but was highly organised  – the wares are all grouped in the same areas and if you look close enough you’ll see bargains – better if you can get a friend like Thierry, fluent in Luganda, to haggle for you.

Armani, Gucci, Ralph Lauren were all there, looking convincing except when they all appeared on the same shirt. Britney Spears jogging bottoms, Manchester United shirts, Boyzone sweatshirts – the full array of popular culture hung off high-up hangers . Most branded items were bad  fakes (sports shoes branded ‘iPhone, or ‘Mike’ instead of Nike, many of them Chinese knock-offs) – the others were genuine fakes.

The wording on some clothes made me wonder how they got to Uganda: a t-shirt of a high school sailing club in Minnesota; a volleyball team’s sweat shirt from a college in New Jersey. There is a controversy here – Uganda once had a thriving cotton and garments industry, as did most of East Africa; today it’s been decimated by the influx of second hand garments from the west, sold to local brokers paid for in bulk by the kilogram. Rwanda, recently stopped its importation of second hand clothes from the USA, because of Trump’s imposing of tariff’s on Rwanda’s textile exports.

A brief aside: incongruous t-shirts

The first time I realised about the importation of second hand clothes in to East Africa, I was at a bus-stop in Kibuye in Rwanda. A young lad beside me wore a a t-shirt that said ‘Chick Magnet’.

I asked him if he knew what it meant; he replied that he knew what a chick was (in French, it is a ‘poussin’), but I felt I had a duty to explain it to him. He seemed quite pleased with himself once I told him.

Chick Magnet and Me, Kibuye, Rwanda.

It was easy to spend half a day in the labyrinthine clothes market of Owino in Kampala, to amble through its shady parts, where the clothes hung in narrow throughfares; where shafts of light were able to penetrate those tunnels of garments, they created  a multi-coloured kaleidoscope, its edges dripping with fabrics, with bobbing heads as far as the eye could see.

I picked up a ski hat for a few shillings, black and warm embossed with ‘Paris’ and a diagram of the Eiffel Tower; it was just right for our impending climb up the Virungas. Juko picked up a fan-belt for his car and Thierry bought a phone. The market took more time than we had planned – most of that was trying to get out.

We managed to visit the Uganda National Museum, the highlight was a cultural village of thatched huts showing the traditional lifestyles of Ugandan people (the bamba, the Batooro, the Bunyoro peoples and many more) filled with clay bowls and pots, cow horns, calabashes for making the local beer brew, knives, bark-cloth, headgear and tools for circumcision. I grabbed the chance to play traditional Ugandan musical instruments (or at least make sounds on them), harps, lyres, one-string fiddles, flutes, pan-pipes and wooden trumpets. Yes it’s fair to say we had a lot of fun in there exposing my lack of musical talent. 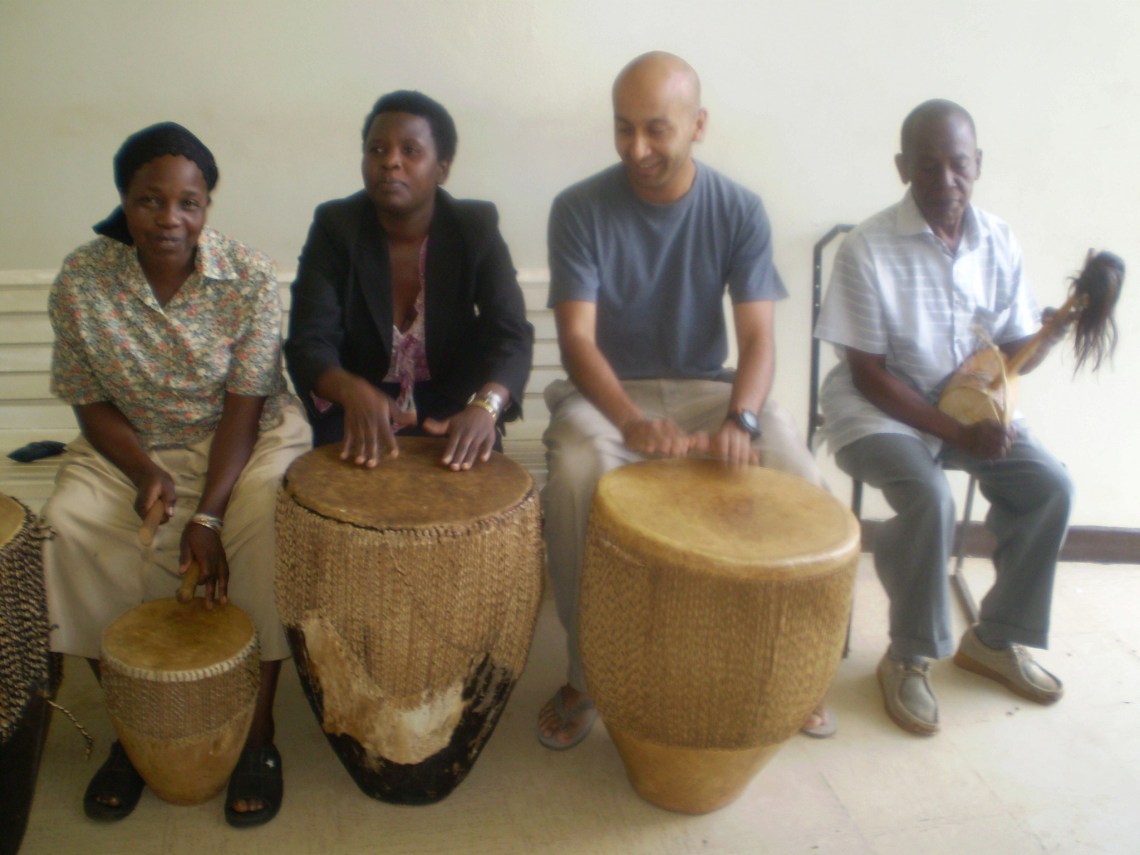 On Monday we had crossed south across the equator and were back in the land of the Thousand Hills, Rwanda; by 6pm we arrived at the suburbs of Kigali. Rwanda’s biggest city paled in to sleepiness after our break in Kampala; that evening as we got off the bus, it felt pleasantly quieter and slower.

This  is part of a longer series of blog posts on Rwanda called ‘Letters from the Heart of Africa’. For background and to access  further posts please click here.

A table of contents so far is below (each post is intended to be read as a stand-alone piece of narrative) and further posts will be published through summer 2018.

1.The flight to Rwanda, the contraband and spotless Kigali

2. A letter from the heart of Africa – settling in fine

3. Getting to work, Rwanda style

3.  Peter and the Soup Confusion

4. A special place of remembrance, hope and beauty

5. Help! I’m a businessman going to work in an NGO in Africa

6. The importance of memory

7. We Need To Talk About Why People Kill Each Other

9. Banana-leaf balls, making friends and a bitter falling out

10. The Shimmering Lake in the Shadow of the Volcano

11. The Chatter of the Raindrops

12. My friends, the survivors

15. Leisure pursuits: tennis, jogging and painful stomach-flattening (please do not try this at home)

16. The Day When Time Slowed Down

17. A Festering Malice: The Grenade Attack

18. The Resilience of Hope

19. A weekend in the rural beauty of Rwanda

22. In Search of Silence and the Missing Female to Female 9 Pin

26. The Sports Bar in the Heart of Africa

27. Where you never walk alone

29. Sometimes on Tuesdays Always with Tea (part one)

31. A Hike Up Mount Bisoke and a Lesson in Understanding Gorillas

32: Being lighter at the equator: a weekend break in the northern hemisphere