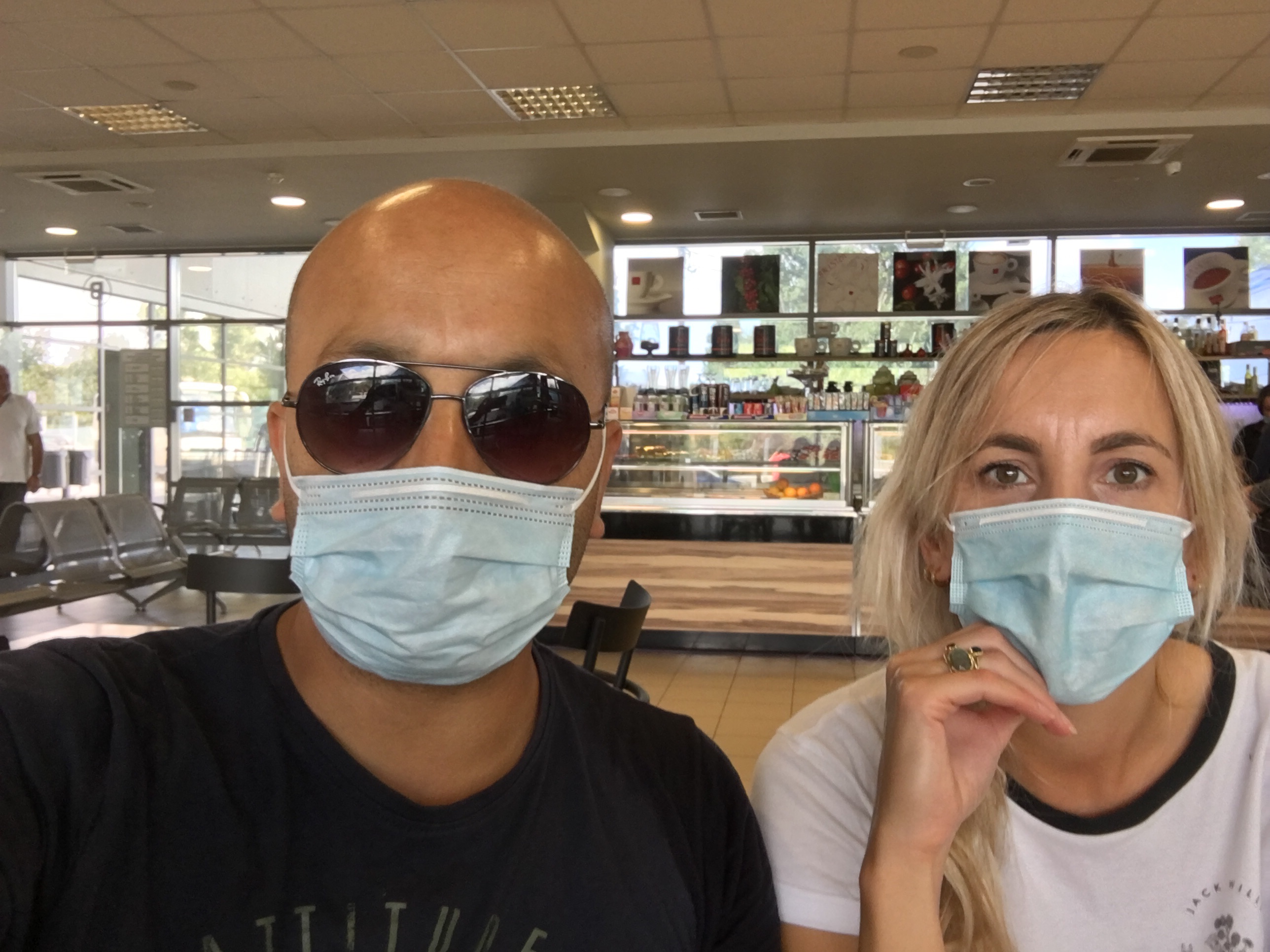 It’s not all bad news. The airport queues are short, bookshops are a breeze and even wearing a face mask on the flight has certain advantages.

These advantages are as follows:

By the way, there’s a list of considerations at the end of this blog post on what you need to think about if you’re thinking of flying and if you don’t want to read about my flight experience just scroll to the bottom.

We had a long think and decided on a late summer break to Corfu in this, the interregnum of the lockdowns.

The air safety drill was a bit different this time.

In the event of a drop in cabin pressure you have to remove your face mask before putting on your oxygen mask. Makes sense.

It was left unexplained though whether we could, in the event of a sea landing, remove our face masks to inflate the lifejacket or blow the whistle on it. I’m now so resigned by the instructions on Covid that I no longer use my common sense or question any command; I just blindly follow the orders. Eat out. Don’t eat out. Don’t bother wearing a mask. Wear a mask. Go to work. Now don’t go to work. It’s a bit like the okey cokey in out in out, and it’s utterly confusing.

As we flew over Germany, my face mask became fluffy and tickly. (It wasn’t Germany per se causing it, it was an hour of wearing the mask).

It made me realise how the Santa Claus at Debenhams must feel every Christmas with his cotton-wool beard but not quite as bad because he has to wear it for two weeks. Even worse, he has to mingle with super-spreaders. The little angels.

I managed, despite the face mask, to hold in my sneezes on the flight. I didn’t want to terrify my fellow passengers.

A middle-aged Asian man sneezing on an aircraft. You thought Snakes on a Plane was bad. This is the new terror at 30,000 feet.

The other issue with wearing the mask for three hours was that it made my reading glasses steam up.

I decided to do an experiment. I tried to hold my breath and exhale only at the end of each paragraph. Too difficult. I held my left nostril down, which enabled me to read through one unclouded lens. It worked. Kind of.

The greatest part of Covid-era flying is disembarking. It is now civilised.

Each row is not allowed to leave their seat until the row in front has left.

The guy who grabs his bag and elbows to the exit is now history.

Standing for ten minutes in a s-shape Beyonce move under the overhang of a locker, waiting for the queue to move is now gone.

And that was it. Passports checked. QR code read. The flight was over, we exited the airport and removed our face masks at long bloody last.

Things to consider if you decide to fly

We had thought long and hard before deciding on making our late summer break to Greece this year and there were several extra things to consider.

Firstly, we needed a Passenger Landing Form (PLF) which needs to be completed days in advance in order to get a QR code emailed back on the day of the flight. This needs to be shown before and after the flight. Not having one means you may not be able to travel, or be consigned to the undercarriage holding the wheels. Minus thirty degrees is a known killer of the germ.

The second thing to bear in mind is you may have to self isolate when you get to your holiday destination. You may be asymptomatic and if you get tested on arrival and are found to be positive (results are out in 24 hours) you might have to swap that that beach location for a government-provided accommodation for isolation. All considered, it’s a very poor use of annual leave.

Then it’s worth considering what might happen on your return if the air bridge is removed while you’re on holiday; you would have to self isolate for 14 days. Those who have since March become qualified as hermits like me, won’t be too perturbed by this. I had already ordered a supermarket delivery just in case (mainly boxes of cat food and Punk) and I hope to improve on my GTA V level on xbox. Only a pandemic makes you realise how unsocial and introverted you really are. Bliss.

Flying in the Time of Covid was first published on www.heyloons.com