It was the most beautiful place I’ve ever worked in: a creamy-white building with balconies facing the hills of central Kigali, nestled in rose gardens and shaded by palms, in a peaceful air filled with birdsong.

But more than just beauty, this quiet, modest site, the Kigali Genocide Memorial is one of the world’s truly special places. It’s a sentinel, a beacon of light, from the hilly heart of Africa, that sends a message of fundamental importance, not just for Rwanda or the continent, but for the whole of humanity.

First and foremost, it’s a place of sanctity and remembrance and was built by the Aegis Trust and the Kigali City Council to give dignified burials for genocide victims – it opened in April 2004, exactly ten years after the genocide.

(This is part of a serialised post called Letters from the Heart of Africa and can be read as a stand-alone piece of narrative or as part of the series. Background and a table of contents can be found here).

As soon as I met Freddy Mutanguha, the General Manager, I knew we would get on. He was 32 years old then, with even younger looks and a composed, responsible manner. One of the centre’s many success stories, only 18 at the time of the genocide, just he and one of his sisters survived. There was always something ambassadorial about Freddy, he could speak to everyone on equal terms, including recent visitors like George W. Bush, Bill Clinton and Ban Ki Moon.

Freddy always referred to the Memorial Centre as his family. When a child has had to suddenly grow up due to tragic circumstances, they take on mannerisms of someone much older, having had to shoulder responsibility from a young age, often becoming the heads of their families. “Being a survivor of the genocide,” maintained Freddy, “carries with it tremendous responsibilities”. Many of my colleagues were such people, orphaned at a young age, their childhoods cut short, still young but with the mature behaviours and thinking that only comes with age.

We walked through an arch of red rose trellises by the wooden bookshop. Rows of concrete chambers cascaded to the bottom of the valley. Some had lilies with purple ribbons fluttering in the breeze.

Each concrete chamber was 3 metres deep and housed several coffins. When the genocide ended, the bodies of victims were left in shallow, mass graves, on roadsides, in fields, embankments and forests. Unmarked, untended, without dignity and without sanctity. In all, 258,000 of the 1 million genocide victims were brought here to lay here in their final resting place. The place is tranquil and dignified. 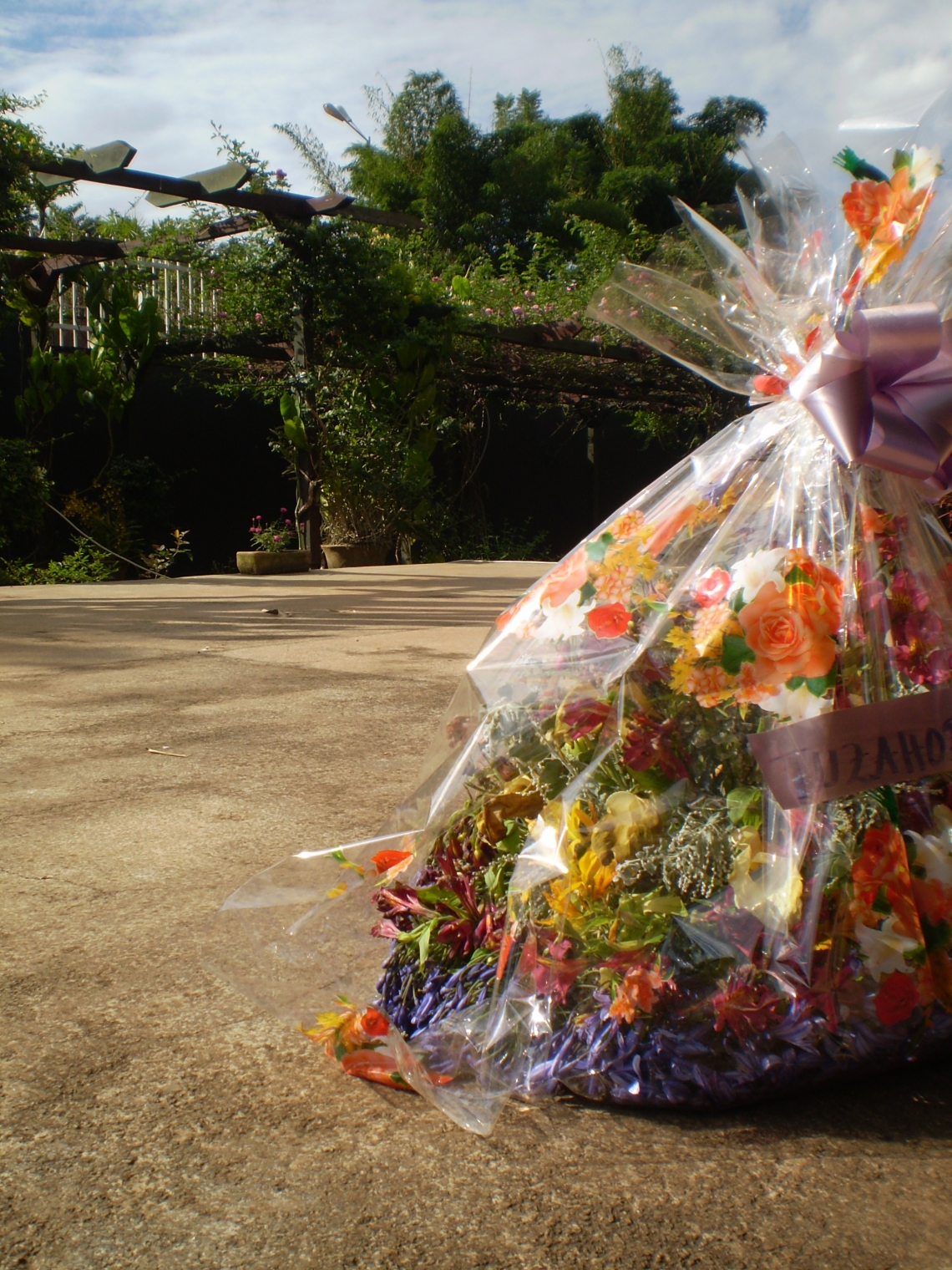 The magnitude of the cruelty is utterly shocking, its statistics barely fathomable. 10,000 people were killed every day for 100 days between April and July 1994. That’s the same number of people that could fill the seats in FC Barcelona’s Nou Camp stadium 10 times over, or the seats on 20 jumbo jets a hundred times over.

But people are not numbers or statistical exercises. The workers at the Memorial Centre spent years travelling across Rwanda, knocking on doors, asking questions to collate the names, record them and preserve them in an archive.

“Entire communities were wiped out in the genocide,” Freddy explained. “There was no one left to report them as missing… people just said, there used to be a family living up there, on that hill, but we don’t know their names and they are not there now.”

Whole communities fell in to oblivion; there was no one left to mourn them; such was the genocide’s consummate devastation. The Memorial Centre, in its quest to document, record and film, seeks to remember them with survivor testimonies. To not let them die for a second time.

Behind us was the Wall of Names, one of the fruits of their labours.

Since I was there in 2008, the memorial centre has expanded in both in size and functions. Today, it has amongst other initiatives, education programmes, a documentation centre with cloud archives to record evidence and to provide support for survivors.

James Smith, the CEO of the Aegis Trust, which established the centre with the Kigali City Council, and today takes Rwanda’s lessons to an international stage, once told me. “Memorials are very important, especially in Rwanda, for a nation must remember its past to have a better future. It’s like driving a car: to have a safe journey, you need to look out of the front windscreen. But that’s not enough, you need the rear view mirror to be totally safe.”

The sun was getting higher and we crossed well-kept lawns, separated with red rock walls,  through the gardens which were themed ‘unity’, ‘division’ and ‘reconciliation’.

“Every plant, every design feature of the gardens here is steeped in symbolism,” explained Freddy and he pointed them out, one by one. Fruit trees for the children of Rwanda; thorny, shade-giving acacia trees for protection; tall cacti, as if from the wild west, for the power of self-protection; aloe vera for healing; roses for love; banana trees for a united, traditional Rwanda.

A gushing stream in the Garden of Unity fell in to a waterfall in the Garden of Division – the fall of Rwandan society in to genocide. There appeared terracotta statues of people, some on their phones, indifferent to one another; beside them, clay elephants for memory, for the events in Rwanda would never be forgotten.

In the final garden, the Garden of Reconciliation, a stream flowed in to a pool from which jutted a  huge conglomeration of rocks brought from all over Rwanda – for a strong united Rwanda.

In contrast to the graves, the gardens exuded serenity. An ambience to nurture thoughts and silent contemplation, to encourage introspection and to ask ourselves the whys and wherefores. There are so many questions. Why did this happen? Why did we in the west do nothing? What are the lessons for humankind.  The list is endless, and the memorial seeks to address answers.

The hill of Kigali’s central business district in the distant backdrop, the bustle of street life, cars whizzing by, cranes lifting. Life went on. Rwanda was recovering.

The museum is perhaps one of the finest in Africa, heart-rending and, at times, emotionally draining, telling the journey of Rwanda, the origins of the genocide, the days of killing, the trials and the reconciliation.

The Holocaust, Cambodia, Armenia, Namibia, the Balkans are all featured for genocide knows no racial, religious or geographic bounds. High-tech with video footages and montages take the visitor to darkened rooms with glass cases of skulls and weapons. Victims photos hung from a line, moved in the breeze from an open window.

It’s the children’s gallery, filled with three feet high photos of faces of children, that hits the hardest. Their smiling, hope-filled eyes; lists of their favourite foods (‘chips’ and ‘Fanta’), their characters (‘lively’, ‘joking’, ‘energetic’ etc.), their best friends (‘sister’, ‘mother’, ‘John next door’ etc.). Finally how they were killed (‘machete’, ‘shot’, ‘arrow through eye’, ‘grenade thrown in shower’ etc.).

As an adviser for  my VSO placement I needed to get my work-plan agreed with Freddy. I have a business background so I knew my work objectives would be around increasing the centre’s capacity for revenue streams. This would be a new career journey for me.

During my six months working at the Memorial Centre, I’d sometimes work on a bench with my laptop, sitting in the shade of the palms in the company of humming birds. I worked with supportive colleagues, many of whom were genocide orphans, who had picked themselves up to work for a common humanitarian goal, often as volunteers. It was a bit like being part of a big family. That’s why I guess the Memorial Centre was the most beautiful place I have ever worked in.

When I came back to England people would sometimes ask me, wasn’t it depressing to work there, in a big cemetery, in such a remote place? And in truth, it really wasn’t. It was a place of remembrance, of beauty and of hope in equal measures. And within weeks of settling in there, it wasn’t Rwanda that was remote any longer. It was London.

This post is part of a serialised blog post called Letters from the Heart of Africa. Full table of contents and background are here