There are many tourist activities to do in Ho Chi Minh City but we preferred to walk its streets, gaze up at its elegant colonial architecture and attempt to not get run over.

There couldn’t have been a bigger contrast in airports as we left Pakse in south Laos bumped along clouds in turbulence and landed at the huge sprawling metropolis of Vietnam’s capital, Ho Chi Minh City; it’s brimful of confidence, big brands, stylish urbanites and some big skyscrapers; one could scarce believe this city was one of the theatres for the most controversial war in living memory.

All the big brands are here now, and it’s all about the money; Chanel, Adidas, Starbucks, Body Shop, and there are huge tower blocks for H&M, HSBC and Zara. You can buy anything here, and Oreos are just 50p and come in 4 flavours.

I’d never before been to a city where scooter riders can also ride on pavements. They’re not supposed to, mind you, but there’s over 8 million of them, so who’s going to argue? They are kings of the road; they mount pavements, beep pedestrians and take shortcuts on the wrong side of the road. Anything goes.

We took a walk round the centre, and whenever the clouds burst we found an awning to stand under. These are the pre-monsoon showers, and whilst they are intense, and noisy, they are at least predictable, lasting a couple of hours and leaving the streets’ surfaces varnished, reflecting the cities lights.

There’s a lot of building work going on, more skyscrapers to add to Landmark 81, or Bitexco Financial Tower.

We visited the war museum which provides the narrative for the Vietnam War, here, called the American War. It’s quite harrowing in parts, but there are positive angles; a letter from Ho Chi Minh to the friendly people of America thanking them for their support against the war; returning vets to gain closure, and there’s a section on legacy and historical truths. There’s also a fine collection of captured American fighter jets, artillery and tanks.

The most beautiful buildings in Ho Chi Minh City are the French colonial ones and they are over a hundred years old. I’d never seen a prettier post office (it still functions) with its arched windows, marble floor, green wooden shutters, wooden panel phone booths and metal beams. It’s been kept true to how it was with a map of the main connections in south Vietnam.

The watchful eye of a painted Ho Chi Minh, the founder of Vietnamese communism, watches over everything in the post office. In contrast to the colonial buildings, the independence palace, which was rebuilt in the 1960s in a very 60s style, hasn’t aged very well and looks like a very fancy Rammada Inn.

In the evening we sat at ‘foreigner street’ a line of bars playing loud music and showing football matches, watching the world go by in hazy multicoloured lights, reflecting in the slowly draining rainwater.

Declining to go down a hole

One of the main tourist attractions in the suburbs of Ho Chi Minh city, is to go down the Cu Chi tunnels, a complex of narrow tunnels where the Vietcong hid from their enemies in the war, where they kept hospitals rations and bedding.

Now going down a tiny hip-squeezing hole on purpose isn’t my idea of fun; I’d probably need to be coerced, or there’d need to be an incentive like a wild animal chasing me. The photos advertising the tunnels showed a western tourist being hauled out of a hole by Vietnamese men and he had a grimace on his face and looked very flustered; it was as if Mother Earth was giving birth to him. We decided to pass on to the Cu Chi tunnels, despite the tour including free tapioca.

Being a middle-aged backpacker romantic I wanted to surprise the beloved sweet dear so I bought tickets to the Saigon Opera House. It would be a nice surprise.

Now, as soon as the beloved sweet one saw a map of the city, she said, ‘we should go here,’ planting her index finger on the opera house.

Well that ruined the surprise.

I still wanted it to be a surprise so I said it was sadly outside our budget. Technically true. And besides, I’m not one of those gap year round the world travellers being bank rolled by a trust fund.

When I eventually told her I had the tickets, it was still a surprise, but more of one that went, ‘surprise! my husband’s not that cheap.’

The building is 120 years old and has winding staircases, chandeliers, upholstered seats, marble floors and the theatre Itself has over 400 seats each spring-loaded and threatening to flip and consume audience members. It has hints of L’opera in Paris, but that is on a much grander, gilded and ornamented scale.

We saw a splendid acrobatic Vietnamese highland tribal display, like Cirque du Soleil, but featuring tribal masks, huge poles to lift people off the ground, acrobats leaping and somersaulting across huge round cane bowls, spinning, jumping and swinging off ropes. It was a special evening.

At the end of the performance the dance troupe came to the front of the opera house and sat on steps singing and clapping under the chandelier.

There was something beautifully poetic about that moment as we applauded the young Vietnamese troupe. When the opera house was opened, opera would have been showcased as the superior culture of the west, having a ‘civilising effect’ on the Asian. And there we were, a group of westerners who’d just been wowed by Vietnamese tribal culture.

It was quite a vibe. 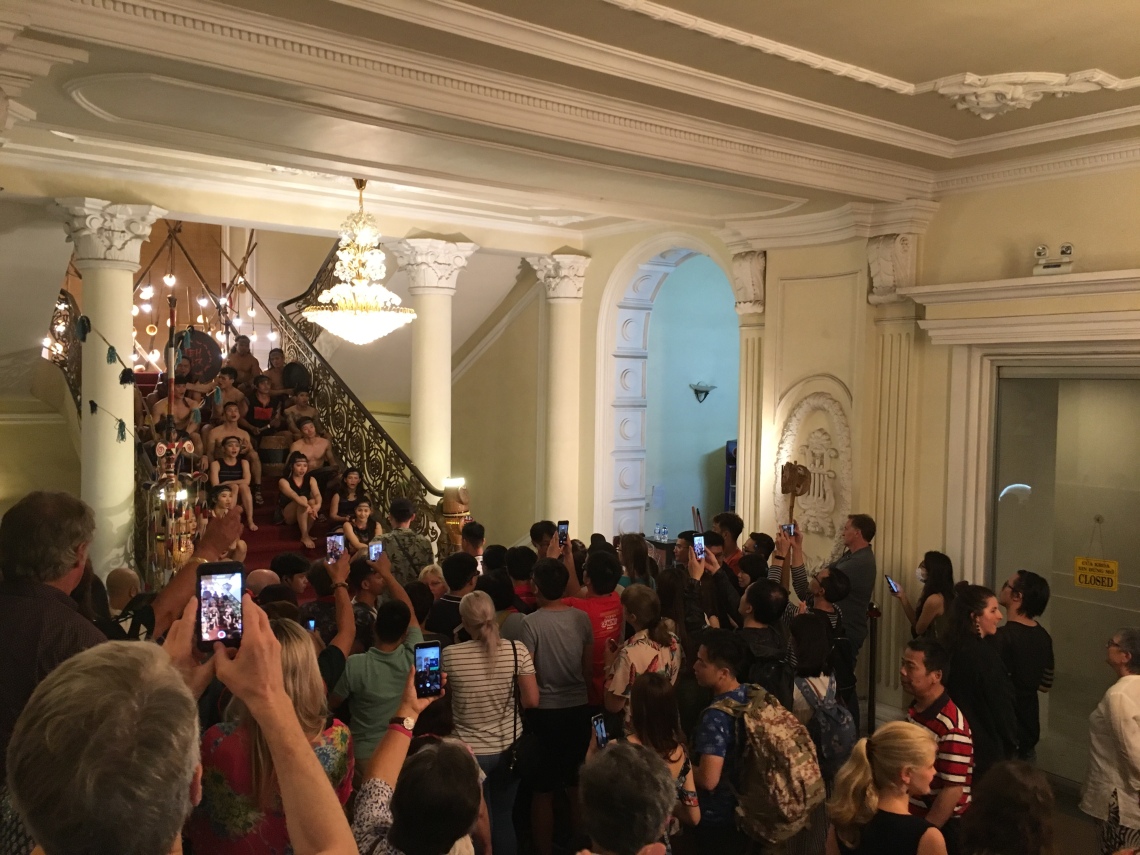 This post is part of the series called 90 Days in South East Asia and was written on-the-road.