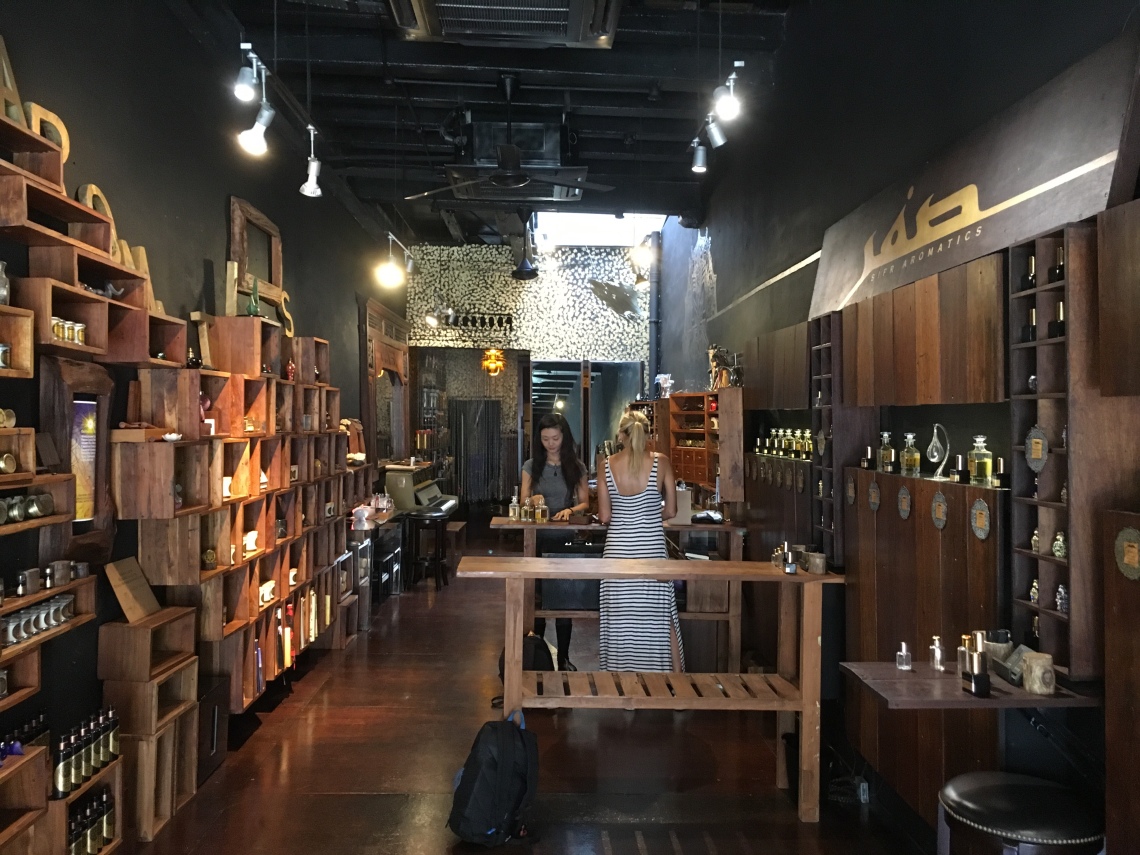 We’d landed in Singapore, our 6th country and 28th place on our 90 day travels around southeast Asia

We immediately took to the city’s perfect organisation; we walked its clean streets, its huge shopping malls, its wide green spaces, through its characterful areas of Chinatown, Little India and Arab Street where the Mrs found her perfect perfume made of the unlikeliest of ingredients.

The Shopping Malls of Singapore

The Shoppes in the Marina Bay Sands shopping mall, in the centre of Singapore, stays at an impressively cool 18 degrees, a little warmer if you stay by the front glass doors and a little cooler on the lowest floor, where there is a small lit-up canal, complete with colourful rowing boats and a giant plughole-like fountain. 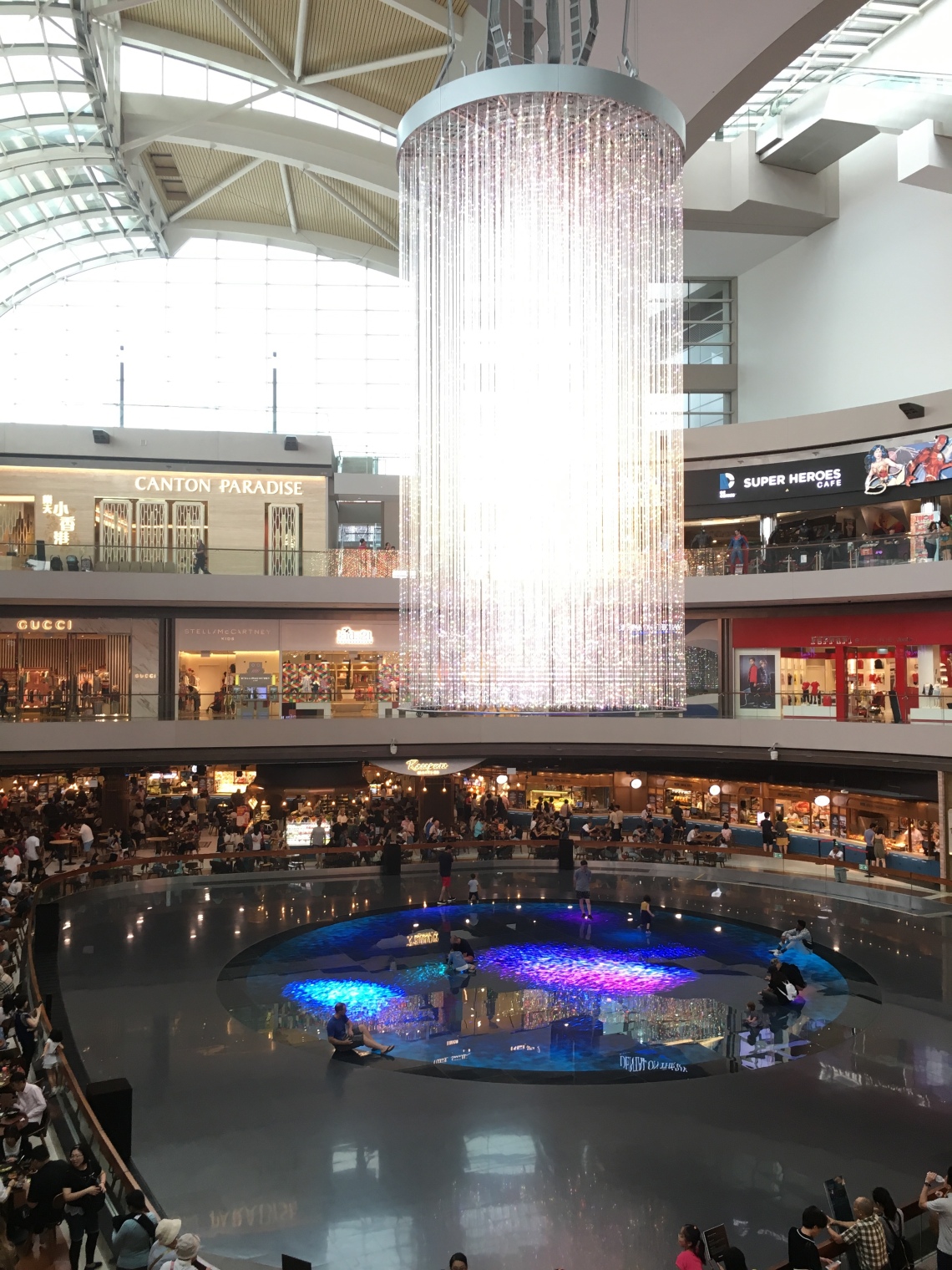 Sarah likes shopping malls because of the shopping and can spend hours in them; it’s really quite an impressive feat of human endurance. This time she was in the hunt for a perfume, Givenchy, Chanel, Gucci were all in her sights, but she didn’t quite manage to find the right scent in the mall.

In fairness Singapore didn’t grab me at first sight. It was a grey rainy day when we arrived and I’d started walking around the marina, next to the huge soulless skyscrapers for banks and financial institutions, and it reminded me a little of the financial heart of London; nice but just too familiar.

But over the course of the next few days, Singapore won me over. Everything is well planned, efficient and thought-through; signposts, road signs are everywhere clear and accurate. taxis are metered, there’s no haggling. It’s a very easy place for a tourist to get by.

Singapore was the first place I’d ever been to in Asia where cars actually stopped at zebra crossings for you.

Some of the architecture that has sprung up in recent years is really impressive. The Marina Bay Sands building with its ship of trees resting across three huge towers is quite a daring piece of architecture; the botanical Gardens by the Bay give the city a sense of openness and closeness to nature and the views across the sea from a 54th floor hotel were spectacular.

The arts centre has been designed to represent two Durian fruit and it’s quite endearing. A few years ago areas that were sea became land by filling in sand and amazing buildings started to spring up. There’s also a beach at Sentosa too that give Singapore, where land is at a premium, an uncrowded feel. 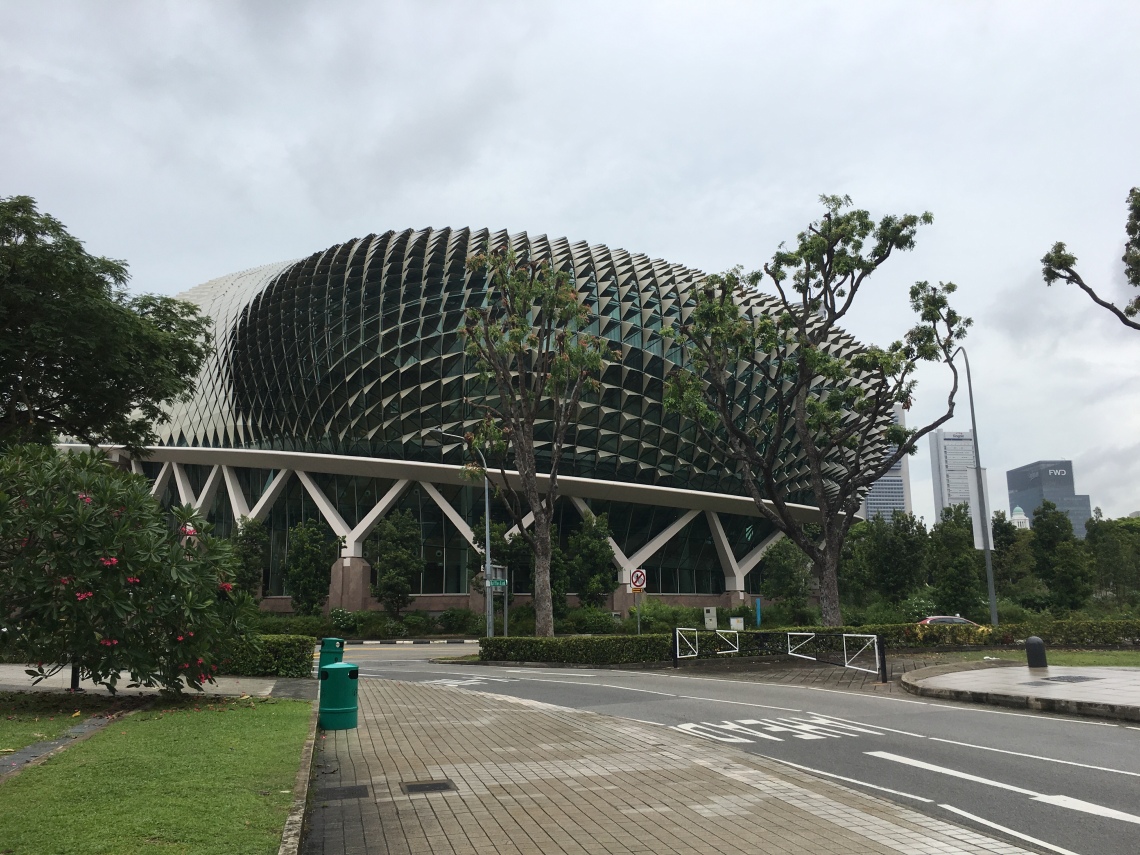 When I studied economics, I became aware of Singapore’s tremendous achievement. In the 1960s, at independence, a third of Singapore’s population lived in slums on the outskirts of the city and half the population was illiterate. Walking around here has really highlighted for me at first-hand, that remarkable journey Singapore has made in just half a century.

We had been travelling for over 70 days and Singapore was our 6th country so you can imagine we were getting a little travel weary.

It was also our belated wedding anniversary so we decided to treat ourselves and go to Raffles for their famous cocktail, the Singapore Sling. 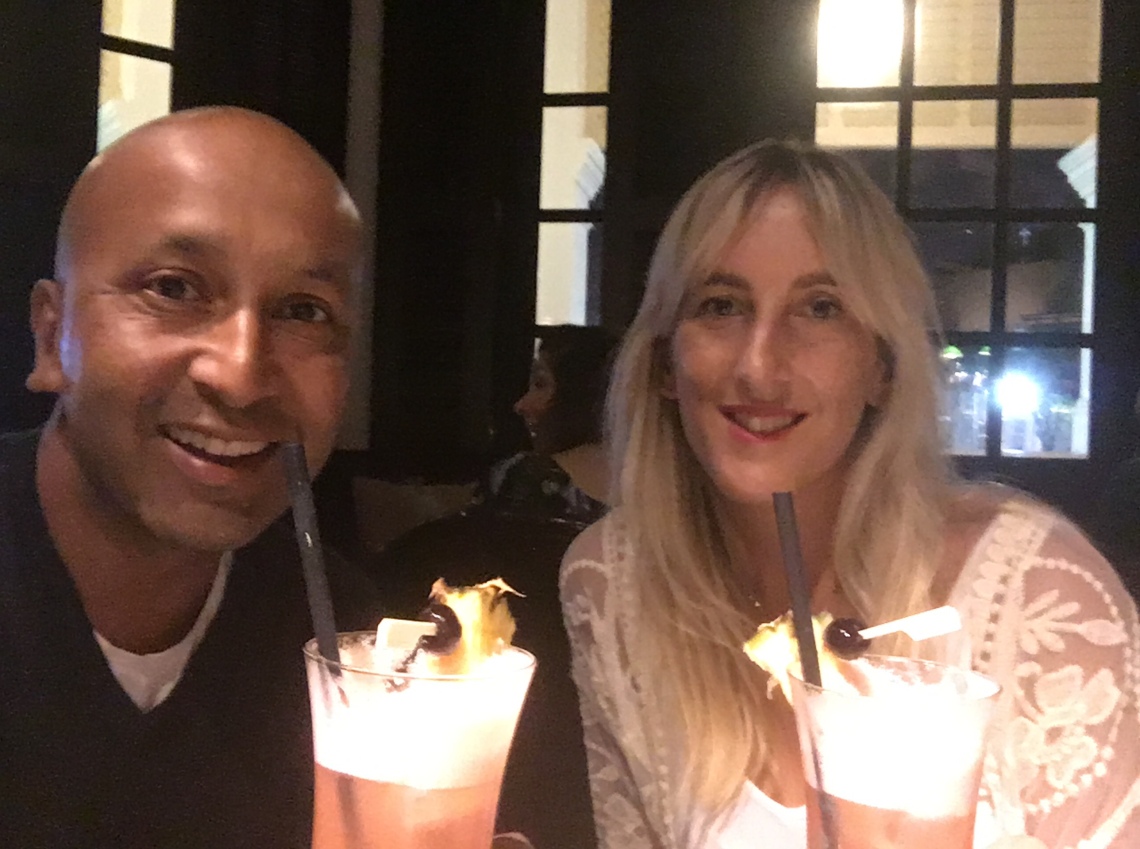 Again, we stepped off the pure path of backpacking, that gritty and character-forming experience of $1 meals and $1 beers (which was my desire when we embarked on this adventure in March). We fell in to temptation again, and found ourselves at the Long Bar in the Raffles Hotel. (I must atone for this one day by staying in a $1 dorm on a mattress of bed bugs, followed by a 30 hour bus journey with no air conditioning, no toilet and a TV that plays all the Police Academy movies on loop, at full volume (including the worst movie ever made, ‘Police Academy 7: Mission to Moscow’); only then may I perhaps salvage some credibility as a backpacker.)

The Singapore Sling is a pink cocktail which was created as a reaction to the unequal treatment of women. The women of Singapore, back in the day, were not allowed to drink alcohol in public. This was wrong both morally and commercially. Some of the biggest boozers I have known have been women.

So the appropriately named mixologist called Boon, invented a new drink that was pink and looked a lot like a soft fruity punch, but he added alcohol in the form of gin. He named it the Singapore Sling.

Singapore seems to be a harmonious place of diversity. Situated on the natural route from India to China, it was ideally placed for sail ships of all nationalities to pass through, and those multi-racial interactions hundreds of years ago have shaped her till today.

We stayed in a hotel in Chinatown and enjoyed its vibrant Saturday night street market of Chinese food from all parts of China, from Canton to Manchuria; there was live music and rows of tables on the streets with people having good laughs and loud conversations. Close by is the beautiful Buddha temple which houses a relic of the Buddha, said to be his canine tooth. 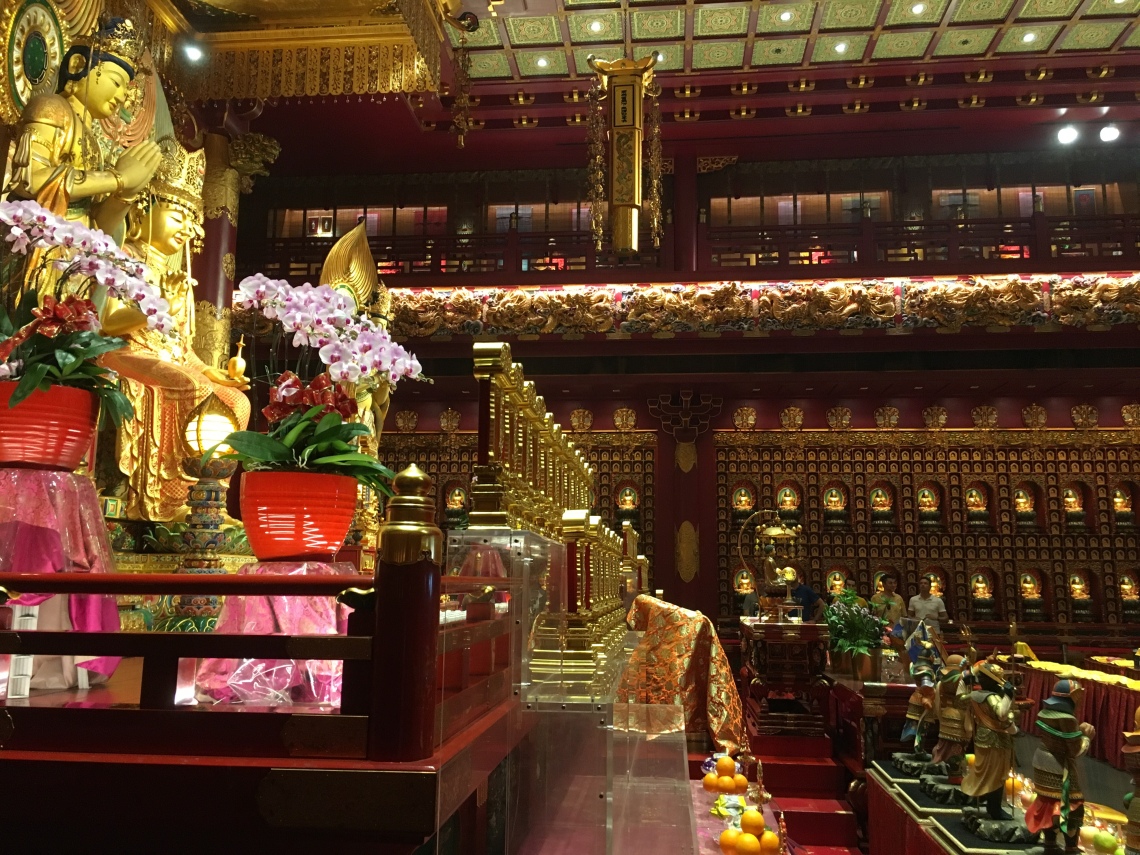 Little India is like a little piece of India, but without the litter and young men asking for a selfie with tourists. There are SIM card shops, smart phone cover sellers, saris and spices, vegetable stalls and huge temples with gods on the tiered facade in glorious technicolour. 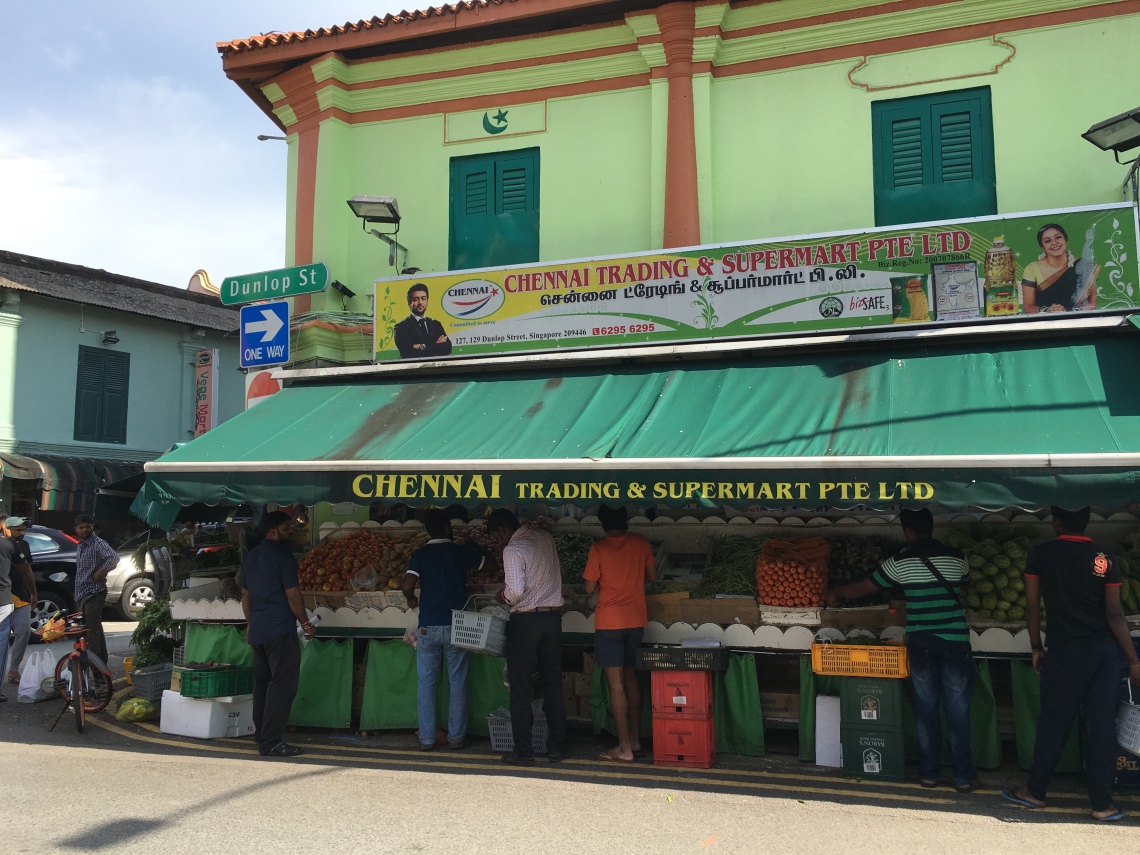 In Arab quarter there’s the impressive golden-domed Sultan Mosque, and we sat admiring it at a table in Arab Street to eat felafel, hummus, pittas and salad. 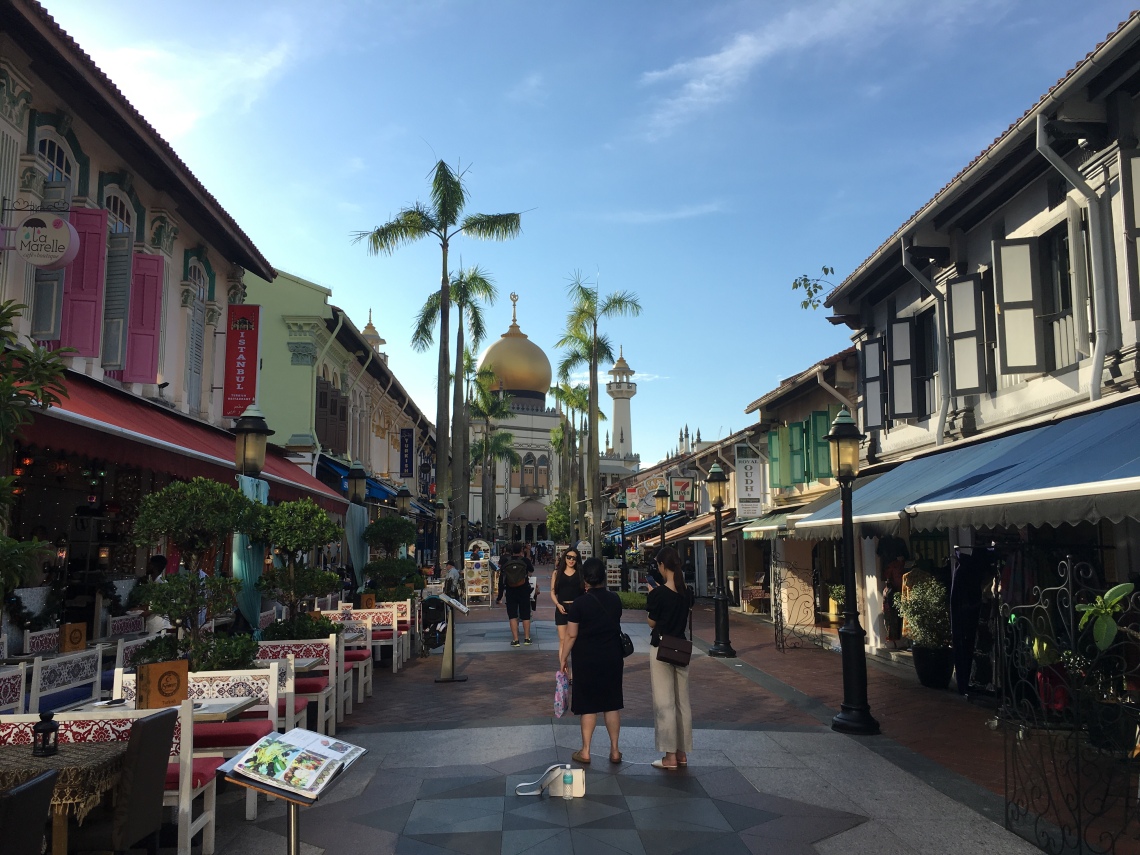 Singapore has a richness of diversity, with its people prolonging their unique traditions, urban fabric and cultures making it a very attractive tourist haunt.

The perfumer of Arab Street

Arab Street has a few perfumers on it too, carrying on the rich and age-old tradition between Arabs and perfumes, ever since Jesus was given frankincense as a baby gift.

Sarah was still on the lookout for a special perfume, a bespoke one, and at these specialist perfumers they are able to find that right scent, just for you. 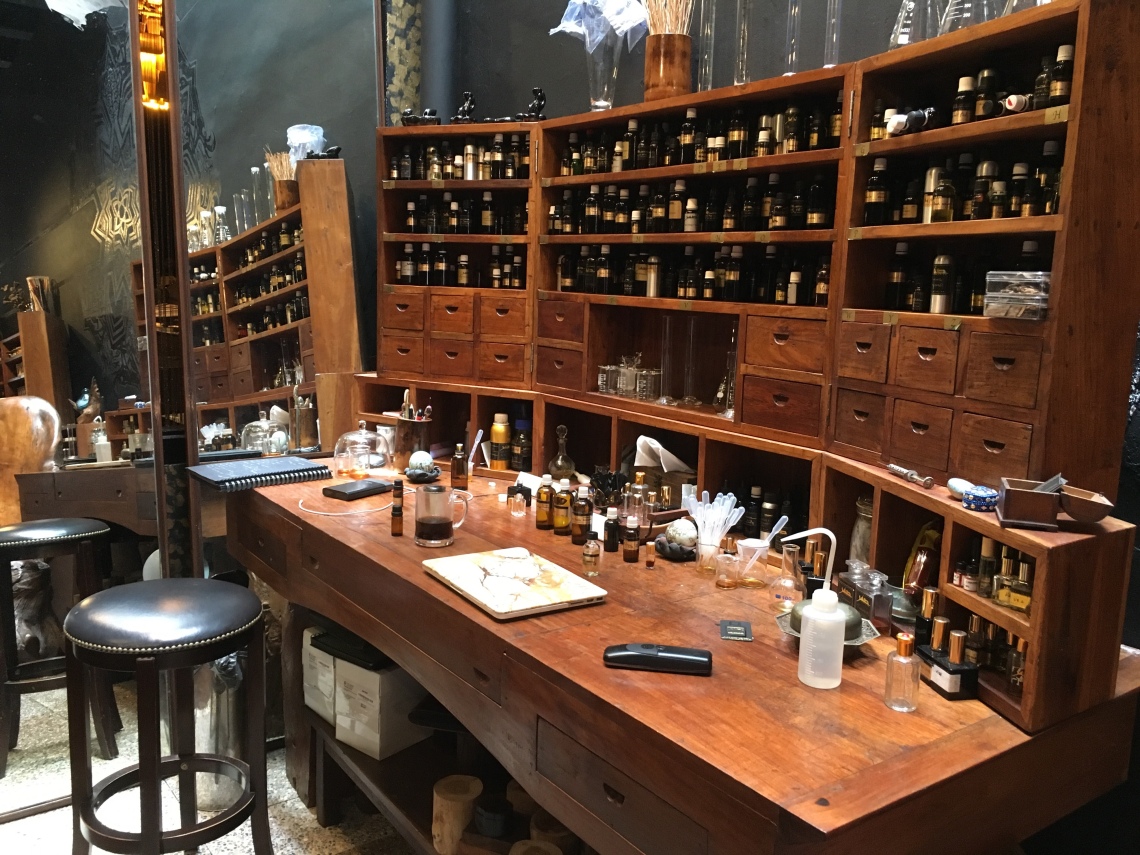 Sifr Aromatics has shelves and shelves of perfumes with an old, familiar feel to it; a little library on perfumes; an old piano; a desk full of equipment like pipettes, funnels and dipsticks; beautiful vials of pink and green blown-glass carefully positioned on mahogany shelves ready to be filled with your favoured potion (or ready to be paid for in case of breakage).

Perfumers live in a world of sensory enhancements, where dreams and feelings are coaxed from scents. They distil the elixir for people to escape in to other realms, of feeing another way, by concocting gloriously pleasant scents. They are, to coin a triple hyphenated profession, nasal-happiness-mongers.

The perfumer, a young lady in her early 30s, started asking Sarah what her favourite colour was. What was her job? What types of smells she liked. Sarah wanted some jasmine in the scent but was uncertain about what the second scent should be. 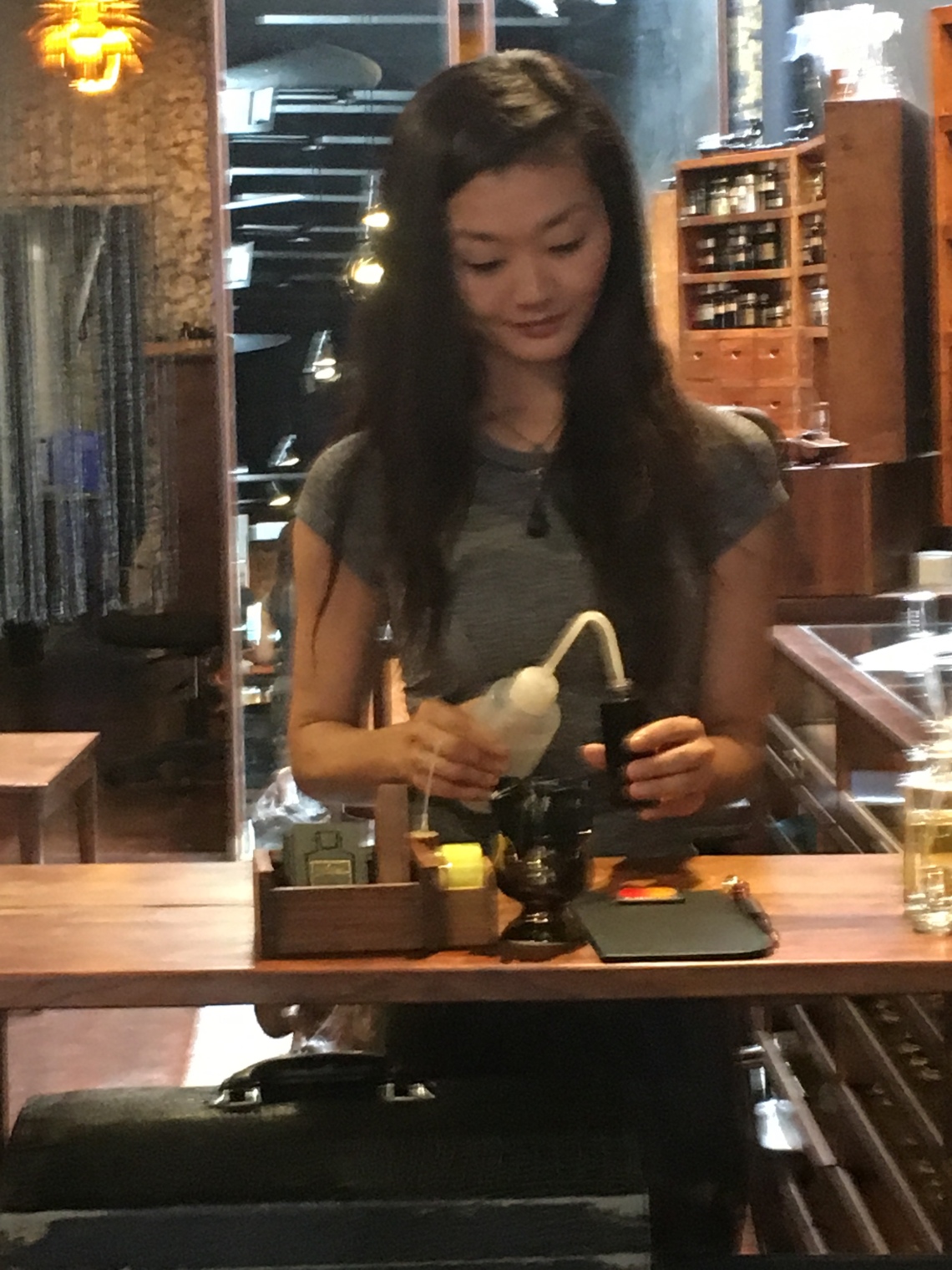 Concocting a scent of jasmine and grey amber

There were so many other scents to choose from, green notes (fresh to balsamic), fruity fresh and floral fresh, whose descriptions give us lay-people at least an idea of the scent.

But perfumers can get super-technical such as describing scents as ‘aldehydic – woody- powdery’; they have a genealogy of perfumes like Darwin’s tree. I started to realise how scientific perfumers were, working at the cusp of human feelings, emotions, elation, joy, poignancy, melancholia, reminiscences and the science of nasal stimulation.

Sarah discovered a subtle perfume she had smelled called grey amber, and it smelt just right for pairing with the stronger tones of jasmine, giving the perfume a flowery scent, with a hint of light and subtle freshness. I would liken it to the smell of a waterfall on a hot day.

The perfumer poured the jasmine and the grey amber perfumes in to a glass vial and asked, “Do you know how they make grey amber?”

“Nothing to do with that type of amber. Grey amber, it comes from the sperm whale.”

“Oh no. What have we just sponsored,” Sarah and I both thought.

“The sperm whale,” she continued, still pouring and not spilling a drop, “sometimes eats things it cannot digest, such as the beaks of squids. These eventually come out of its mouth as a small rock-like object that floats around the ocean.”

Eventually some of the grey amber manages to drift to land (it’s still quite rare), usually around Pacific-rim countries like China, Malaysia, Indonesia and New Zealand and can at first smell quite awful.

This is to be expected; smelling awful is generally considered a universal quality of all known vomit types; there is an alternative theory that the grey amber comes out of the other end of the whale’s digestive tract. I didn’t tell my wife this. Sometimes it’s better to know less.

But as it ages, the humble grey amber which looks like a malformed piece of large pumice, starts to give off a beautiful aroma. It is the ugly duckling story for a rock and the aroma is the emerging swan, elegant, sophisticated and beautifully poised.

In the past, before people knew about grey amber, whole fishing villages suddenly become fragrant and no one knew why.

Sarah was very pleased with her purchase, poured with exacting standards in to two glass vials which she tucked away in a box and wrapped with clothes in the centre of her backpack.

Hopefully they’ll be intact when we get back to London in three weeks, or she’ll be a very fragrant backpacker these next few weeks.

This post is part of the series called ’90 Days in South East Asia’ about our travels in India, Thailand, Laos, Vietnam, Myanmar, Singapore, Indonesia and Malaysia in March to June 2019, and was written on-the-road mainly on buses and in airport lounges.