Imagine over 2,000 ancient stone temples, the fruits of devotion that have lasted almost a millennium. Some grandiose, topped in gold, others small and humble, dotted across a sandy plain of 40 square miles. This is splendour laid out on the grandest of scales making Bagan like nowhere else on earth.

We loved Bagan so much we decided to stay for 5 days.

We settled in to a routine; our mornings were spent exploring on electric bikes; by 1pm when the outside temperature hit 40 degrees we’d go back to the hotel to relax, or cool off in the pool; Sarah befriended the Yellow Cat and would sneak him sausage pieces from the buffet breakfast. In the late afternoon we’d take the scooters out again to explore some more and then go to a restaurant.

The temples in Bagan follow a certain format. Generally they’re four sided and the larger ones have four Buddha statues facing the cardinal points of the compass.

There are the huge temples and the main ones we saw were:

Each temple in Bagan has a different feel

There are so many temples in Bagan that some are just referred to by registered numbers. Some have a distinctly peaceful feel, quiet and cool in deep stone works, the beautifully serene Buddha statues sitting in the fragrance of jasmine garlands infused with burning incense.

In others, like Dhammayangyi, you’re followed around the entire time by an entourage of Myanmarese children who want to sell you postcards, sand paintings, water, bangles, clothes, anything, and they won’t take no for answer. There is little scope for interrupted study of the amazing wall paintings or statues.

Most of all, I loved riding down the quiet sandy lanes with Sarah and just exploring, getting our wheels stuck in mounds of sand or just getting lost. (There are only a few main roads in Bagan so you can’t really get that lost.)

The sandy lanes might suddenly open up to a magnificent huge temple, full of people and market stalls or you might find yourself alone, no one else around except lizards rustling in the dry leaves; some temples might have snoring sleepers, or young men watching Champions League on their smartphones. There is such a difference in the ambience of the temples.

Bagan’s legacy on Myanmar was immense

A thousand years ago, there were two major empires in southeast Asia. One was the Khmer empire from Cambodia, famed today for Angkor Wat. The other was the Bagan Empire in central Myanmar.

A thousand years ago, Buddhism had yet to establish itself in Myanmar at that time (quite late considering Myanmar is next to India) but the turning point was when the king was converted by a monk from a nearby kingdom.

So began Bagan’s glory period of the building of thousands of pagodas, temples and stupas, the monuments that adorn and grace this flat and dry landscape till today. Monks from far and wide came to study in Bagan and the place became a bastion of Buddhist scholarship.

In just 200 years more than 10,000 monuments were built in Bagan and the city had 2 million inhabitants.

There are many theories about why the Bagan empire fell; some say it was the Mongols invasions; some say the empire was weakened before then with the growth of tax-free religious wealth which divided the kingdom.

After the empire collapsed, it fell in to 250 years of fragmentation, the temples fell in to disrepair. Today some 2,200 monuments of the original 10,000 survive.

The hotel receptionist showed us all the main places to visit on a map, where to shop and where to eat. But then he said:

“There are some nice bars close by like Wetherspoons…”

A grey mist of disappointment hit me. I tried not to show any emotion but I must have looked like The Scream.

For non-UK followers of this blog, Wetherspoons is a UK chain of bars. It’s a wonderful hangout for getting a cheap burger and beer for £8, watching sports on TV or the occasional late night fist-fight. But to have that here in Bagan? I felt deflated. What else would Bagan have? A Greggs?

We got chatting to the owner, Winton, a young lad with interesting stories, busy but who always seemed to have time for a chat.

He had gone over to Bristol in the west of England some years before to learn hot air ballooning. Coming from Myanmar, his visit was eye opening. Burger Kings. The size of Heathrow airport. Even the M4 motorway with its 6 lanes seemed amazing to him.

From that I realised how isolated Myanmar had been from the outside world. Even the M4 seemed interesting.

He learned the art of hot air ballooning and then got a job learning to cook at the Cambridge Arms. At weekends he’d go out with his new-found friends, and each time they’d start off at … where else … Wetherspoons (the beery one of which Bristol has several).

When he came back to Myanmar as a trained cook, he decided to set up a restaurant. It’s traditional in Myanmar for businesses to be named according to lucky numbers and names dictated by superstition. (Myanmar still is a very superstitious country. Its government once changed all denominations of bank notes to end in 9 because 9 is a lucky number.) Some of Myanmar’s superstitions come from a secondary belief system about spirits called nats.

In order to breakaway away from those traditions and superstition that he felt was holding things back, he named his business Weather Spoons, a nod to his fond days in the west of England, and with a slightly changed spelling to highlight the link between weather and food. He also came from the village of Wetha. It was all beautifully poetic.

So, far from the places of cheap beers and pre-noon drinking, Weather Spoons in Bagan was a pleasant surprise; a trailblazing break with superstition and judging by the queues, Winton has done very well indeed.

Going up the tower in a thunderstorm

Since 2016 it’s been forbidden to climb the temples. An earthquake at the time made many of the the structures unstable, and there were cases of tourists ignoring rules, falling off the temples and getting killed. In addition, the authorities said that people were disrespecting the temples, sleeping in their upper floors, eating an drinking there.

So today, gone are those sunset money-shots of the temples from the higher storeys, when lines of people would wait, feet dangling down precarious ledges, for the sunset or sunrise.

Ask around and people will still say you climb temples at the north corner of this or that temple; or that you can bribe a guard to take you up one. But generally, every big temple we saw had a pile of thorny branches at the the entrance to its steps and at the top a locked gate.

You’ve got to be pretty determined and a little delinquent to do that, because even you do make it up the steps, you’ve got to wait for the sunset and if the Myanmarese police see you, you don’t know what might happen.

There was just one other option for us to see the landscape of Bagan from above and that was to go up the tower. The authorities made a multi storey 360 degree viewing platform, resplendent in manicured gardens, a gift-shop and restaurant all connected by lifts. Critics claim the tower looks incongruous with the feel of Bagan but I don’t think they’ve done a bad job, at least from afar.

We rode to the tower on mopeds just as huge rain clouds with dark underbellies glided in from the east, making twigs and leaves fly up and birds seek shelter.

Once we had taken the elevator up the viewing platform the sky had darkened except for a flash of gold where the sun was setting, shrouded in clouds. The landscape looked dark and brooding; with so many temples in view it looked beautiful like a sixteenth century landscape painting.

I do love a thunderstorm. There are so many acts to the play; the winds; the clouds; the flying debris; the blackness; the first rain; the smell of the earth; thunder and lightning in a spectacular lighting show. You’re guaranteed excitement tinged with a hint of danger. They remind us of our vulnerability, and the power of nature. In contrast I find sunsets a little dull and slow (without any sunset being guaranteed) but Sarah likes them and apparently they are ‘romantic’. That’s why I do sunsets.

The rains came in heavily and sideways. It became hard to stand without being buffeted around on the viewing platform. We tried to spot the next patch of sky to be lit up.

The winds turned up a notch to almost being able to throw you, so we decided to go downstairs to the restaurant for mocktails, where the poor staff were mopping up huge pools of rainwater that had seeped through the window frames, under the myriad of drips.

I took a photo of Bagan through that leaky window, while the raindrops were hitting the glass sideways and it looked quite like a 16th century oil painting. 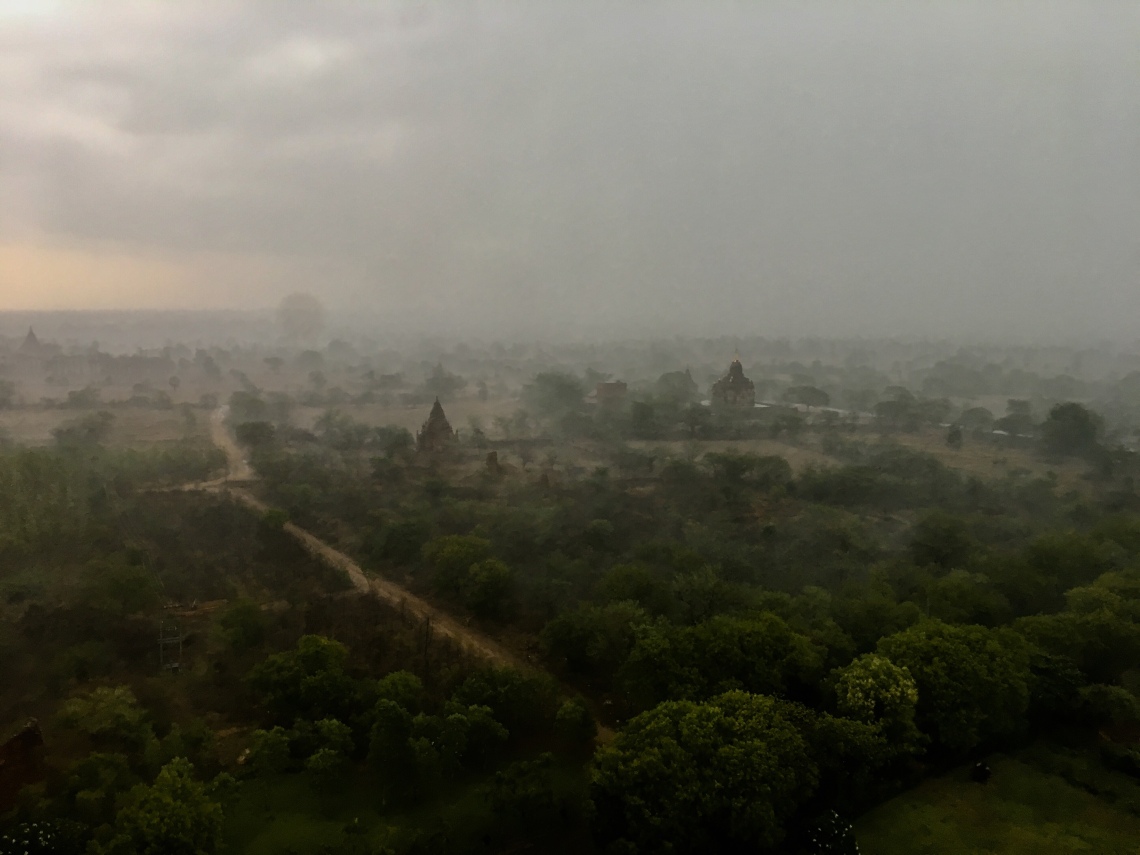 The rains subsided. The light was cleansed to a sharp, clinical brightness and back on the flooded viewing platform we could see the fine details of the nearest temples and pagodas. The air smelt sweet and earthy. A rainbow came out.

I guess we got our money shot and rode back to the hotel happy but wet, and were greeted by the Yellow Cat. 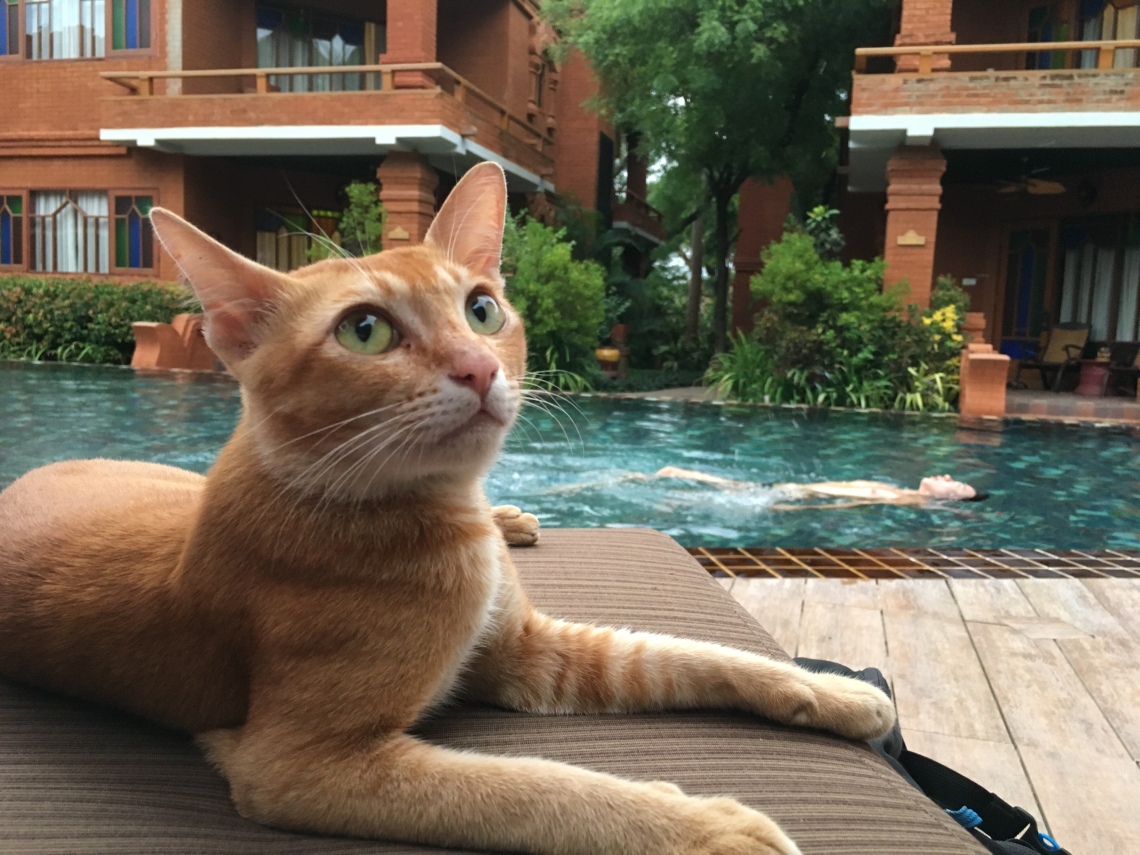 This post is part of the series called 90 Days in South East Asia about our travels in India, Thailand, Laos, Vietnam, Myanmar, Indonesia and Malaysia in March to June 2019, and was written on-the-road mostly on buses and at airports.