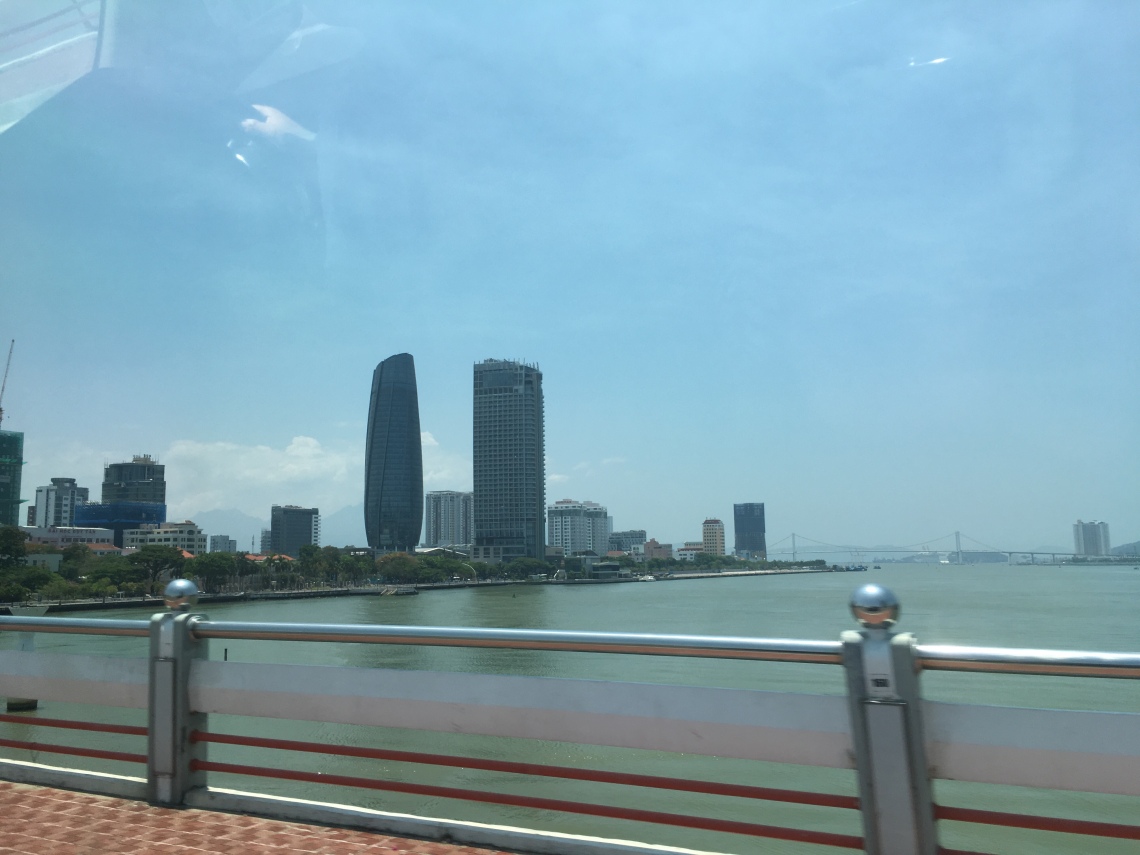 We’re now half-way through our 90 days backpacking in south east Asia and we had just arrived in central Vietnam when Sarah started to notice that I was getting lethargic, had had some night shivers, had lost my appetite and was wanting early nights.

Some of this is middle-aged-ness. Some of it, like a 39 degree fever, isn’t; so when we arrived in Danang, a city in central Vietnam, Sarah said, ‘today were going to the doctors’, and checked me in to a clinic.

From what I recall of Danang, from the taxi, it was a modern, slick city, with shiny glasss towers, beautiful suspension bridges, a Ferris wheel, and a wide expansive sense of lightness and airiness. It’s a symbol of a new confident Vietnam, commercial, modern and growing, so far from the war-torn split country of 50 years ago.

In the clinic a nurse clicked something in my ear and confirmed I had a fever of 39 degrees. What sorcery was this?

Suddenly I was in a bed rigged up to an intravenous drip; it all looked very ER and serious till I asked her what was in the the drip.

Paracetamol? You can get Paracetamol anywhere, it’s 25p a box at Boots and you can just swallow it with a glass of water. No need for a drip. It seemed to be bit of a sales gimmick.

I lay on the bed for an hour till the drip had fully emptied; the nurse came back, took my temperature again and said, “37 degrees. Fever down.” She gave me a glinty smile that seemed to say, that’s worth $600 right?

In fairness to the clinic, they were able to run a whole course of tests, malaria tests, white and red cell counts which all came up as normal and even gave me a five page print out of my results; it was reassuring but a little frustrating because I didn’t know the cause of my fever.

As I entered my PIN and took back my credit card, the nurse at reception gave me a ‘free’ digital thermometer, some probiotic fluids and, just as I was leaving, almost as an afterthought, said, “Oh wait, there is one more result to come in after 2 hours; you might have typhoid.”

Rarely has ‘typhoid’ been said with such nonchalance and gay abandon; a light afterthought, but she said it in such a sweet, demure way, as if she might be saying, ‘might you like a slice of Battenburg cake and a cup of tea before you leave?’. Nurse in Danang, whoever you were. You had me at typhoid.

(Later that evening I got an email from above mentioned nurse saying the typhoid test was negative. This wasn’t a surprise because I’d left England with a fully up-to-date set of jabs).

For my money’s worth the doctor was unable to tell me what was was causing my fever.

I resolved to stop googling ‘tropical diseases that cause fevers‘. The list was too long, led to too many further questions, the possibilities too numerous, the outcomes generally too moribund.

The next day we were in Hué, the ancient capital of Vietnam, and went to a multi storey private hospital, a modern facility busy with doctors and nurses where medicine is practiced at a fast pace and patients are whizzed along. It was clean, reasonably priced and I was pleasantly surprised at its competence.

The only downside was that very little English was spoken in the medical facility and Sarah and I had to guess our way around the departments holding wads of A4 paper printed in Vietnamese.

Their testing was thorough and the doctor said he wanted to test me for Dengue Virus. At the end of the day, the Dengue result came up negative too and I was a prescribed a course of antibiotics.

We popped by a pharmacists in Hué to top up our first-aid kit. As English is not spoken widely in Vietnam, the pharmacist would speak in to Google translate and then let me read the English.

I really should have learned some basic Vietnamese before coming here because I ended up miming in a pharmacists, a dangerous activity, where a slight twist of the hand or flick of the wrist can lead to entirely the wrong medicine.

Miming ‘rehydration sachet‘ was a laborious routine; I pretended to tear open a sachet and pour it in a glasss of water and stir with a spoon; it was a little like an 1970s disco move. She didn’t understand and gave me heartburn sachets so I had to use google translate to help me out on that one.

Paracetamol was slightly easier to explain; here in Vietnam it’s pronounced Paracetamooool as if you’re falling down a mineshaft and it’s your last request because you know you’re having a mother of all headaches in the morning.

Finally, the culmination of my routine was a mime for Imodium. The ladies in the pharmacy got it immediately, and thought it was funny. I think I’ll just leave that there. The mime did the job.

Travel is not always a bed of roses, it’s not a series of unbroken golden, fabulous days where everything goes right. There are down days when you don’t feel well, when you get ripped off or conned, when your travel is cancelled, when you have to try your hardest not to annoy the person who is the dearest to you because you’ve been spending so much time together. And if your health takes a slip, suddenly all the new places that should fill you with wonderment and awe can suddenly become quite lack-lustre.

But, day by day, I’m feeling better on the antibiotics; I am off booze, managing my fever, trying not to look like a fool with a thermometer in my mouth all the time; better, Sarah gets all off the drink allowance, small recompense for looking after a grumpy patient.

Next stop: Hoi An and Hué

This post is part of the series called 90 Days in South East Asia and was written on-the-road.