We arrived via seaplane, landing in a sea filled with spectacular limestone cliffs rising out of the water. 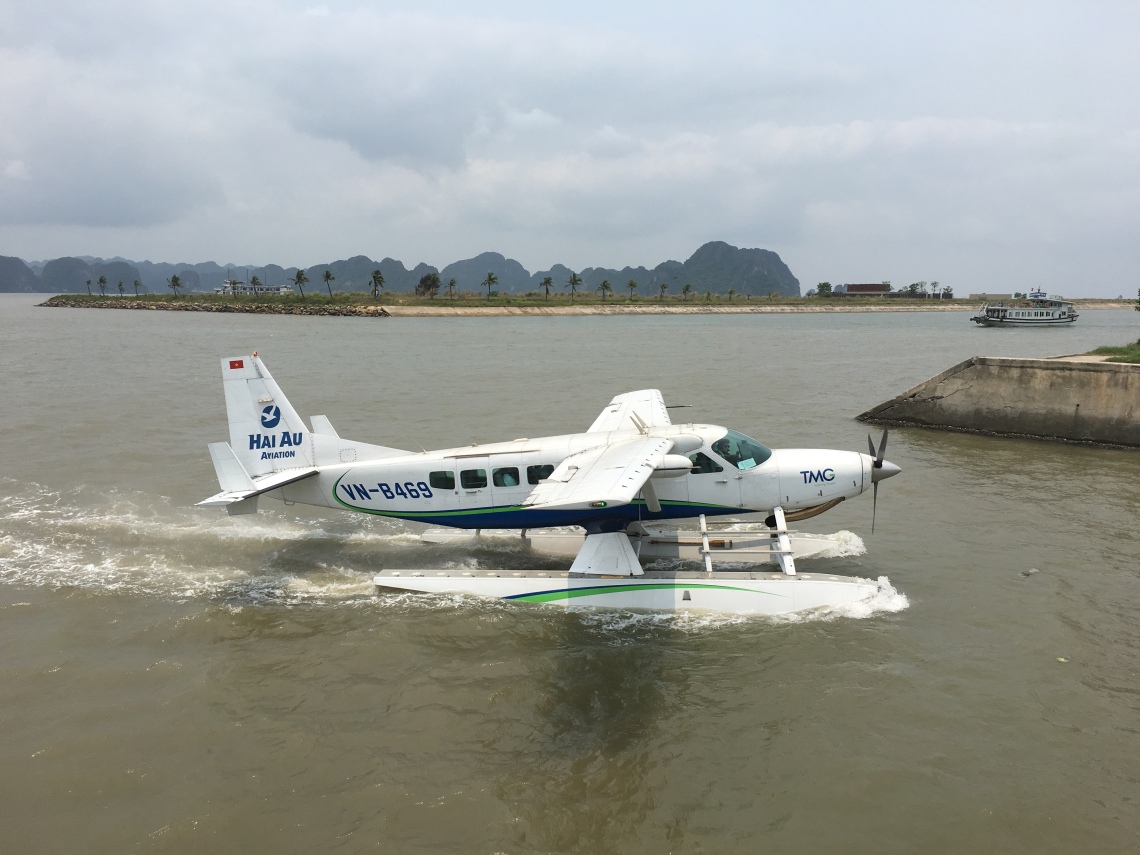 I realised this wasn’t going to be a normal flight when I saw the weighing scales at the check-in counter. There were the usual baggage scales but also a neatly placed set of bathroom scales in front of the desk.

I’m sure this would be very controversial back home with human rights challenges of size discrimination, but the practical reality for a small 12 seater amphibious Cessna Caravan, where even our baggage allowance was a lean 12.5kg, weight was at a premium.

I felt like a bit of a charlatan. This wasn’t exactly proper backpacking. It wasn’t ‘roughing it’ as such. We had stepped off the pure path of backpackerdom, of long $5 bus rides, of $15 rooms, and in to a plane which harked back to the glory days of flying, halcyon times when aviation was more intimate, when your captain said hello and helped you on board and you, as a passenger, felt like an individual and less of an item in a production line. Oh well, so it’s not real backpacking, but sometimes you’ve got to just say ‘what the hell,’ and treat yourselves.

We boarded the 12 seater seaplane via steps at the back; the pilots even helped us on and in to our seats. Everything on board was so neat and compact, minimal space was maximised, no food, no loos, no flight attendants; you could see the cockpit and the controls, the pilots’ head-up-displays on the windows and right across the seats to the back of the aircraft.

And there we sat in our seats awaiting take-off, our postures angled slightly upwards with the nose of the aircraft. 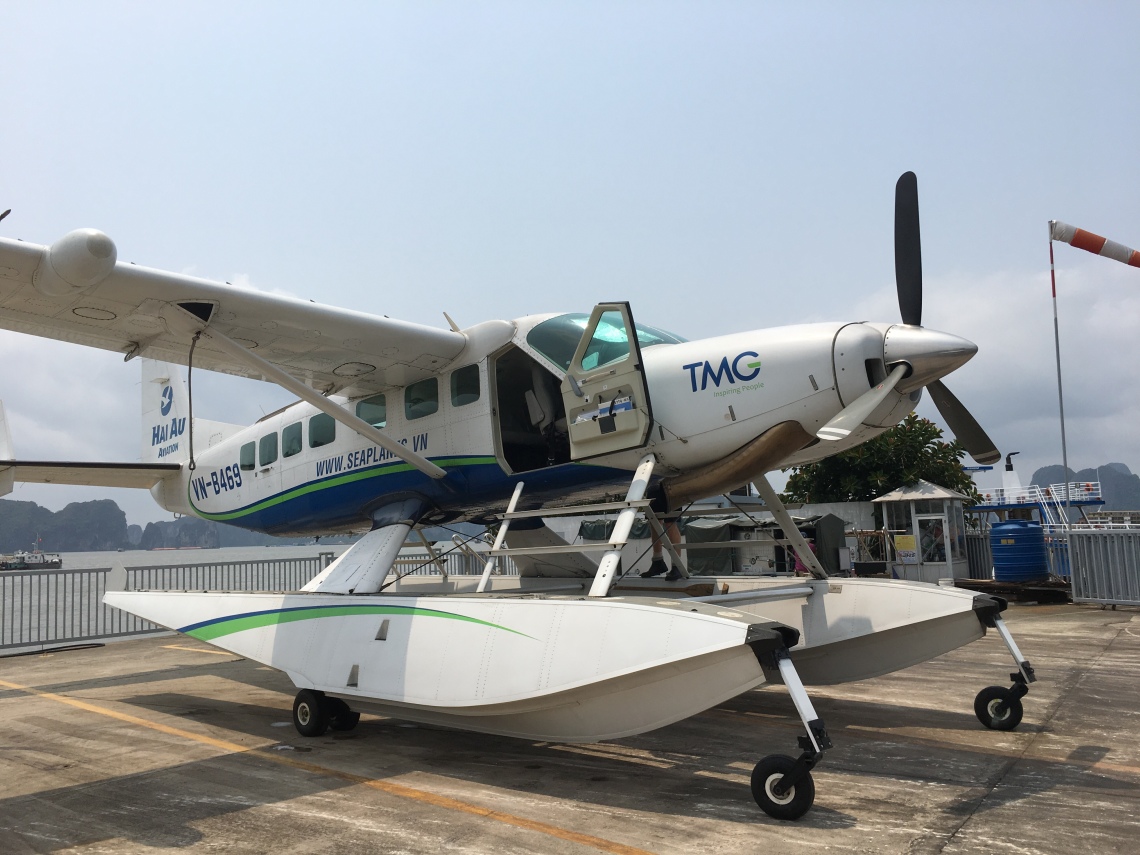 That re-positioning helped me with my normally nervous disposition towards small propellered aircraft. I have phobias for turbulence but not for fairground rides. This was suddenly exciting.

The most impressive thing about the aircraft’s set up was the pilot’s moustache. It was perhaps the most handsome set of whiskers I’d ever seen outside of a Hercule Poirrot movie. He had clearly cultivated it with some mindfulness and lots of wax; its ends extended in to a knitting-needle-like point, pointing slightly upwards at an angle of 45 degrees, as straight as a ruler; perhaps it was an ideal take-off trajectory. Infact, given the compact instrumentation onboard, I wouldn’t have been surprised if the ends of his moustache harboured some secret aviation technology to monitor the level, pitch and yaw of the plane.

The engines started, we taxied down the runway waiting our turn. Noi Bai International Airport at Hanoi is a huge airport with lots of traffic, and beside those large airliners of hundreds of passengers, taxiing for take-off, the size differences really became apparent. We were diminutive beside those airliners. We were like a toy.

Soon we were airborne and gaining altitude above the suburbs of Hanoi. The engine sound was a little like a food blender but I tried my very best to ignore that thought.

Everything on the seaplane was so transparent. We could hear the pilots talking to each other, adjusting their HUDs, pulling on levers, pressing buttons and pushing their joysticks. The inner workings of aviation were on display for all the passengers. I started to believe in flight.

Occasionally an alarm would sound and, being a nervous flyer, my pulse would race. But the pilots weren’t readying to jump out with their parachutes; they were busy pushing and pulling switches, calm and unruffled, this was business as usual with full transparency; even the turbulence of the clouds felt natural, like a boat on waves, the pilot was as cool as a cucumber and his moustache was staying in place.

My mum flew planes even smaller than this as a teenager in India. I guess flying nerves and genetics don’t have a correlation. 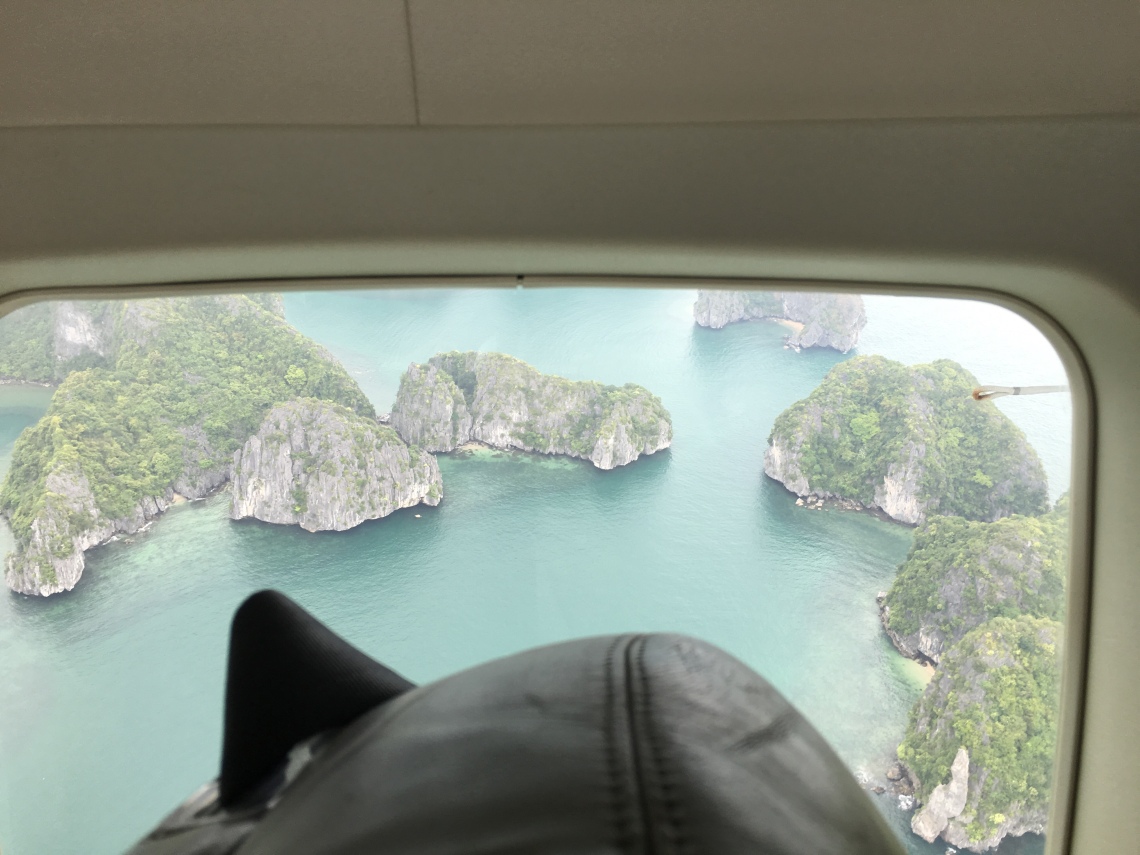 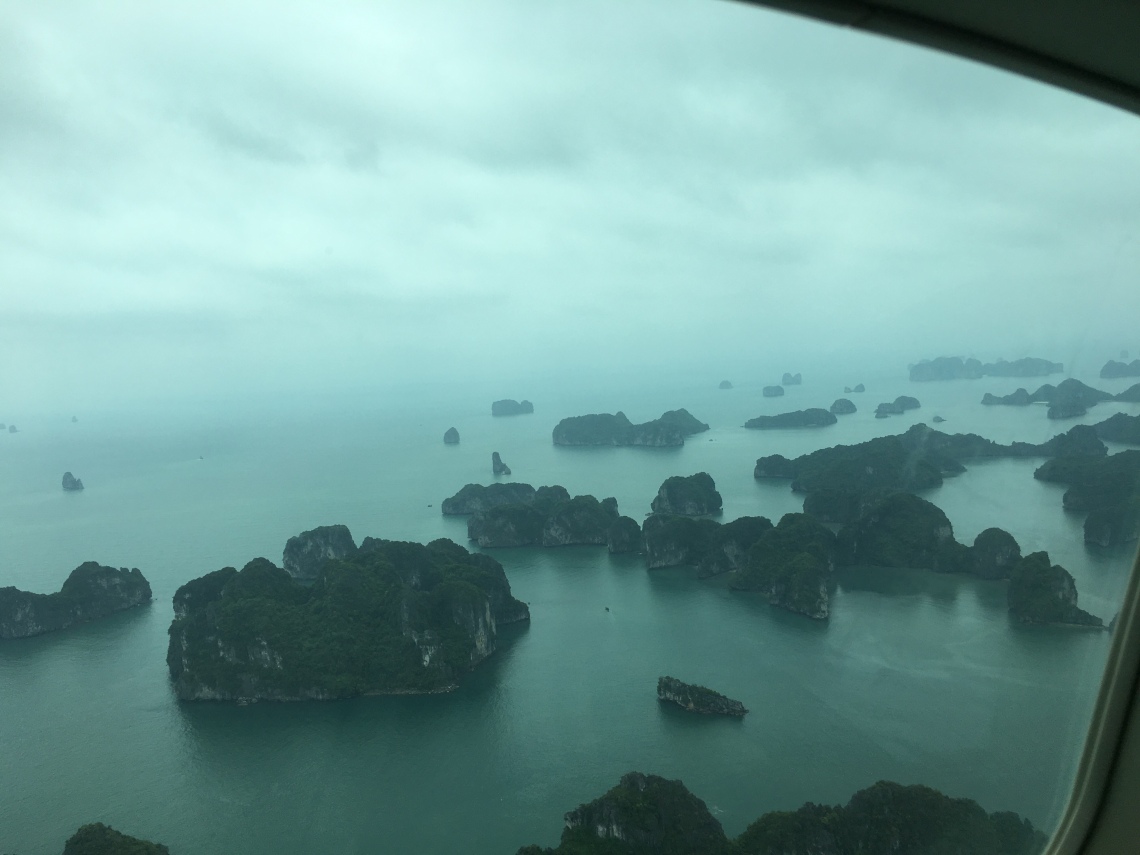 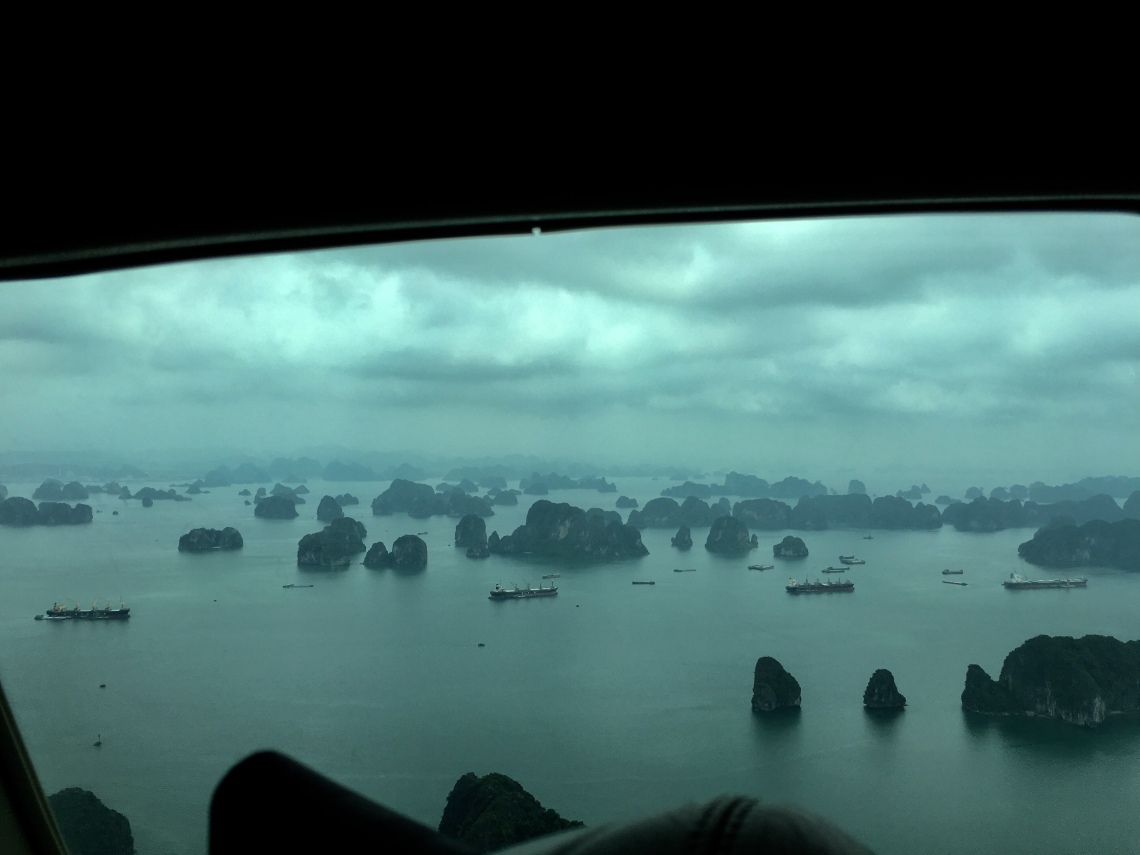 Soon, we arrived at the sea dotted with karst limestone cliffs. The scenery below us was spectacular and utterly unique, and each time we banked we stared down in awe. 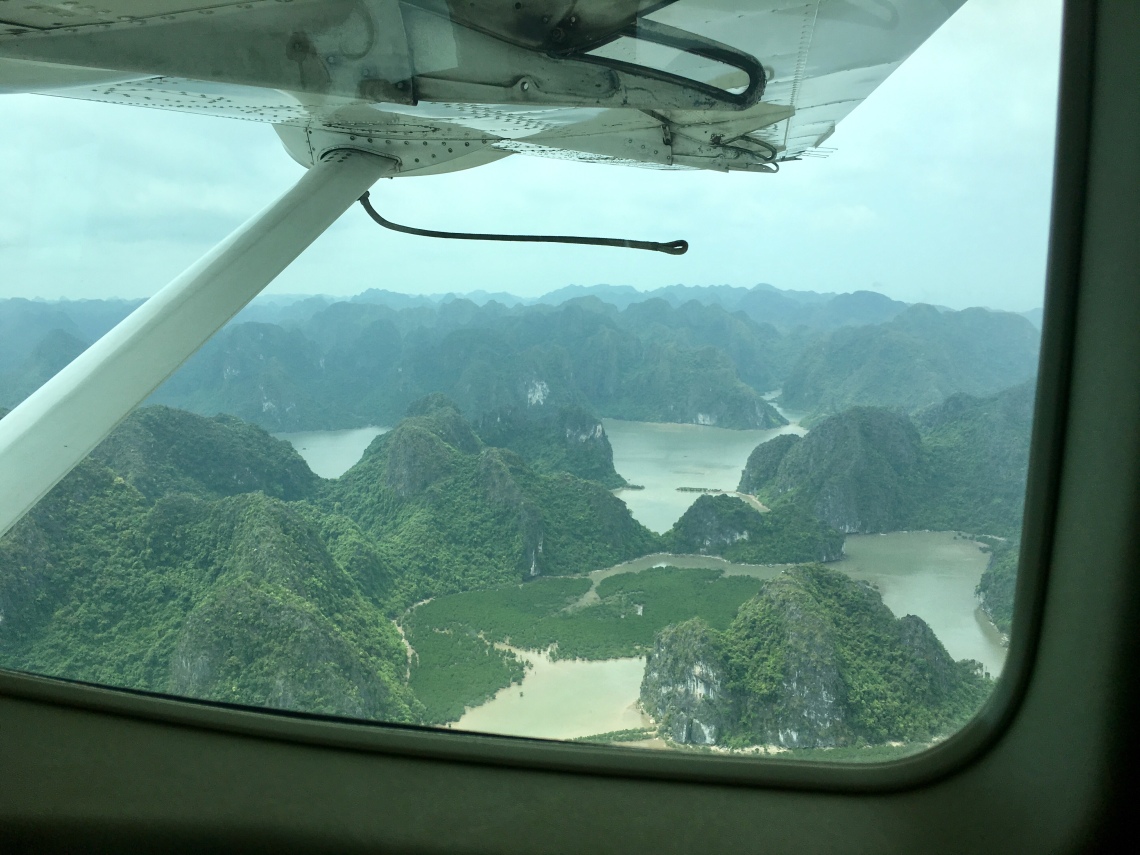 The landing itself was soft, without the jolt you get with a land landing. And following this soft touchdown, there are a series of small judders as the floats make contact with the waves. At the end there was a little splash and suddenly we were in Halong Bay.

We spent the next few days on Cat ba Island, taking mopeds through its national park, exploring a cave hospital from the Vietnam War and enjoying its beaches imaginatively named Cat Co 1, Cat Co 2 and Cat Co 3.

Cat Ba town wasn’t what I had imagined it to be. Vietnam is going through a huge commercial phase, and the town was filled with massive hotels, terrible karaoke (someone killed ‘Lady in Red’ every night we were there), trees on the sea front bedecked in fairy lights, and techno music on full blast.

It was perhaps Vietnam with a hint of Blackpool, Southend or Weston Super Mare … but the Hanoi urbanites love it. It’s their country, and they don’t owe tourists like us any quaintness, so it’s all progress of a sort I suppose.

This post is part of the series called 90 Days in South East Asia about our travels in India, Thailand, Laos, Vietnam, Myanmar, Indonesia and Malaysia in March to June 2019, and was written on-the-road.